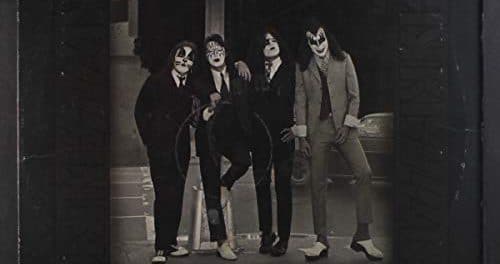 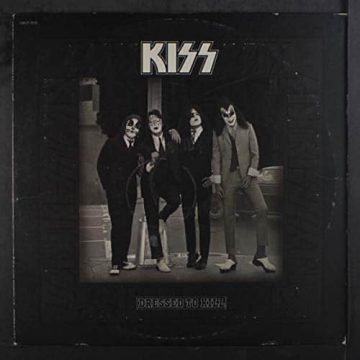 Review:
There are many KISS fans who think the band really clicked with 1975’s Dressed To Kill. The debut self-titled release from the band is now filled with most songs that have been heard during the live set throughout the years, and is considered a classic in terms of recognition. Some fans (especially from the comments from my review last year on it) think Hotter Than Hell lacked quality production which, to me, gave the appeal, with its rawness. Many in the KISS Army look at the third record as the one that really started the band’s quality run.

The album itself, when first pressed, had longer spaces in between the songs to make it sound longer than it really was. Most of the songs are relatively short in length. Since I wasn’t a KISS fan when it came out originally (I was two years old), and the fact that I didn’t really start collecting their music until the late 1980s, I was not able to experience what fans thought of the record when it first came out (especially the mixed reactions when Destroyer was first played on fans’ record players).  The Dressed To Kill  cover is one of the more well-known in music period. Even many that didn’t like KISS have seen the cover throughout the many years of mass merchandise from the group, with the band members in full makeup wearing suits.

The first track “Room Service” is a song celebrating the life that the band was living at the time — living out of hotels and meeting many women on the road. Paul Stanley has stated in interviews that for some of the songs, the band used acoustic guitars on top of the normal mix to add a more full sound to the songs, and this was one of them he mentioned. This driving guitar rhythm  (along with the bass line) keeps the song moving throughout the short opener. The drum fills by Peter Criss is underrated on the song. For many years, I thought Peter was a drummer that just basically kept the beat and was not as spectacular as many state, but this is one song that he jams out to.

The first time I heard “Two Timer” was when I got the band’s You Wanted The Best, You Got The Best live CD. This is one of my favorite songs from Gene Simmons. The bass playing on it has a creeping slow groove to it, which became a staple of many of Gene‘s songs. I always liked the lyric “a three time loser” for some reason. Some KISS critics scoff at their use of sex and women in songs, but for me, this line is just an underrated lyric in context of the title. Ace‘s guitar solo on here, is pure greatness. He doesn’t put too much in it, and it fits the song perfectly. “Ladies In Waiting” would not get written today, comparing women to “meat,” but it was the 1970s, and it was KISS, which broke many rules when it came to writing about sex and women. The bass playing on here adds the uniqueness of the song. Peter‘s drumming fills, with the galloping style, gives a nice touch to the song.

“Getaway” was a song that Ace wrote, but at the time wasn’t comfortable singing lead, so Peter got the lead vocals nod (according to Peter‘s book). This is a song that I feel is one that some KISS fans don’t mention when discussing rare cuts from albums. The rhythm has a groove to it that is infectious in its pure straight up rock. Frehley‘s guitar has his signature sound to it. I was never a huge Peter Criss fan vocally (until the later work of the original line-up), so stating that this is one of the best songs on the album, shows my respect for this track, convincing this skeptic.

I first heard “Rock Bottom” when the band recorded their wonderful Unplugged show. Even though I had the cassette copy of  Dressed To Kill, I never listened to it much after the initial purchase. This is one of the longer songs on the record — a little over four minutes — and combines the introduction from a song that Ace was writing, and Paul liked it so much, he added it to the song he was working on. The overall flow of the release is well put together, in that the placement of the tracks fits wonderfully. Listening to it as a whole, putting the song here just makes sense, and doesn’t seem out of place. Another one of my favorite songs is “C’Mon and Love Me.” Gene‘s backing vocals on this adds to the song, and the bass gives it a nice dance feel. I always liked the opening lines of the song, with “I’m a Capricorn, and she’s a Cancer.” It is such a 1970s style lyric, with a nod to the astrology signs. There isn’t a designated part for an Ace guitar solo, so when he does come in with his fills, it gives it an extra shot of power to the song, which compliments the overall vibe. The catchy lyrics makes it hard to imagine that this wasn’t a radio hit.

“Anything For My Baby” was another song that had added guitars to it for the sound. I am not crazy about the opening of the song, but when the song kicks in (with the drum fills and breaks similar to “Room Service”), the song gets better. Peter‘s drumming during the chorus is different than his other work on the album, where he’s not just playing a straight beat throughout. Paul has stated in interviews that he was not a big fan of the song, compared to others on the release. I kind of agree. The whole album is so short that this song is not enough to skip over, but to me, it’s a weaker song compared to the others, however Peter‘s work on here is why this song should be listened to.

“She” was a song left over from the Wicked Lester days (the band Gene and Paul were in before KISS), and has become a favorite through the years for KISS fans. Peter‘s drumming is more of a jazz style, which is what he was influenced by, and also has a drum / bass part that brings a style that is almost a beat where warriors will be inspired to prepare for battle, while Ace solos overtop. This darker song — once parents heard this and saw the band visually, could cause panic and shock — created the stereotype of the band being satanic among those that weren’t familiar with the band.  This is a song that us drummers just have to love, with its groove and style. “Love Her All I Can” is a song that many KISS fans state is a favorite off of this record, with good reason. There is a lot going on here with Peter‘s drumming fills, Ace‘s great solo full of speed and intensity, and the solid vocals. This song is a hybrid of progressive rock and hard rock. This is probably my favorite off of the whole album, and that many casual fans may not know about but need to discover. This is the song I had on repeat several times while writing this review. It just jams.

The final track became the signature KISS song, but it was the version of “Rock and Roll All Night” featured on the first live album that gave its life. Struggling to find a hit for the band (and capturing the live feel that didn’t translate on record), Gene and Paul were asked to try and write a rock anthem for the fans to get behind. Originally a song called “Drive Me Wild,” the band turned it into the legendary song it has grown to become. Without taking in account the song today by its success, this is a good ending point for the album. Now, is the song overplayed to death? Absolutely, and as a KISS fan, I  am prone to turn it off if I hear it on the radio, but one cannot dispute that the song became legendary, and will be played for more generations to come. I am sure we would all like to be receiving the royalty checks for this song alone. The band succeeded in giving a rock anthem (although they did not know it until the Alive! release), but closing the record with this song is well placed.

Although the songs are really short, it is a good thing to me. I’d rather have great three minute songs that rock out with no fillers, compared to a nine minute song that has too many solos, or is drawn out before the fade out (especially since I grew up on songs from 1960s, where songs were under three minutes in order to get radio play). Some songs still have a rawness to it (not as much as Hotter Than Hell but less than the later big production on Destroyer). I can’t agree with those that state Dressed To Kill was the first really good release by the band, but instead keeps the quality going from the first two albums. Being a huge fan of the later years of the band, this is as good as the others of the original line-up. The great thing about the short songs on here is that it keeps the listener wanting more, and that’s what a good record should do.