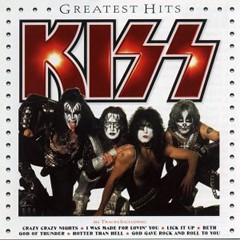 Review:
You wanted the best, you got the best — another greatest hits CD from the almighty KISS! Greatest Hits was a UK compilation of the hottest band in the world’s most loved and famous songs, and is a must buy for the troops of the ‘KISS Army’. The album was released to coincide with the band’s final show of their Alive/Worldwide reunion tour in London, England.

“Crazy Crazy Nights” gets the ball rolling with its massive chorus and catchy guitar hooks, complete with lyrical themes of unity and hardship. For a trip back to 1979, “I Was Made For Lovin’ You” was KISS‘ response to the main trend of the day, disco — and like the pseudo-psychedelic “Sure Know Something” it can be found on the Dynasty album. “Detroit Rock City”, “God Of Thunder”, “Do You Love Me” and “Beth” are all included from the band’s 1976 magnum opus Destroyer — the latter song being non-typical of KISS, with its soulful Peter Criss lyrics and string section. “Lick It Up” is the brainchild of Paul Stanley and (arguably) KISS‘ most technically gifted axeman, Vinnie Vincent.

Fans of 1976’s Rock And Roll Over will have their appetite fed with “Hard Luck Woman” and Gene Simmons‘ autobiographical “Calling Dr. Love” — we also have three tracks from 1977’s Love Gun album, the unforgettable title track, the sexually deviant “Plaster Caster” and “Shock Me” with vocals by timid guitarist Ace Frehley and a Led Zeppelin-esque guitar solo. “Shock Me” isn’t the only Frehley gem present on this compilation, as “Cold Gin” is also penned by the guitarist and contains a very memorable riff with tales of gin and alcohol.

The remaining songs, “Deuce”, “Strutter” and “Black Diamond” from KISS‘ 1973 self-titled debut, “Hotter Than Hell” and the equally anthemic songs “Rock And Roll All Night” and “God Gave Rock And Roll To You” are sure to leave you fired up and ready to, er… rock!