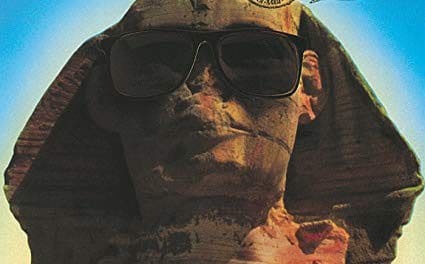 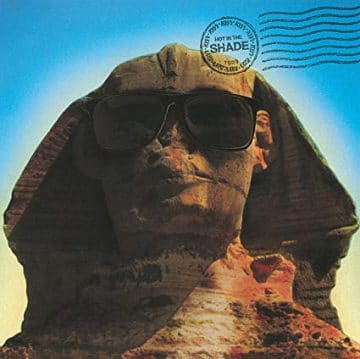 KISS
HOT IN THE SHADE
Released on October 17, 1989 (Mercury Records)

Review:
Hot In The Shade can be considered the non-makeup version of Music From The Elder in that KISS fans either love this record, or hate it. There are several complaints of the release, from too many songs on it (a total of 15, with almost an hour run time), to the production being not as great as the other albums. In several interviews in the past, guitarist Bruce Kulick has stated that he was not a fan of the album, because the band basically took the demos that were recorded, touched them up, and used most of them as masters. A few songs had an un-credited Eric Singer on drums, and some tracks were drum machines, according to Kulick.

The opening track “Rise To It” starts with a blues/slide start before kicking into a harder rock song. The video was something most fans remembered, with Gene Simmons and Paul Stanley arguing via 1975, if they could make it in music without the makeup. This, to me, showed a humor to the band, where they gave a jab at critics thinking they were only a gimmick and many times stated the demise of the band, and fifteen years later, KISS were still going strong despite the critics’ thoughts. The song has a catchy sing along chorus, and great drumming by Carr, along with a nice solo from Kulick. This is a great opener for the album.

The second track proves that the number of songs was a problem of the release. “Betrayed,” written by Simmons and Tommy Thayer, has a heavy feel to it, but the drumming to me is weaker than on some of the others. I am not sure which tracks had the drum programs or are the ones that Carr did not play on, like Kulick suggested in books, but it seems too basic for me throughout the song. This is also a weaker Gene song, compared to some of the others on the release. It’s a let down with the second song being one that can be passed over so early in listening. But that’s what I do. “Hide Your Heart” is a great song, which was the first single from the album. The video was one of my favorites, which had a girl torn between two men, where one was in a gang, almost a newer West Side Story feel. The black and white mixture with color also made it appealing. The catchy chorus is easy to sing along with, and the drum fills coming in when the song goes to a softer sound after the guitar solo, brings power that adds to the song. This is one of my favorite songs off the release.

“Prisoner of Love” has a shuffle/swing style to it, without given up on the hard rock. This is a better Gene song than “Betrayed.” “Read My Body” is Stanley‘s attempt adding rap to the album. Why? I don’t know, but since I don’t like rap anyway, this song is another skip for me. Too many songs on the album? Maybe, and this would be one of my cases for that argument. “Love’s Like A Slap In The Face” is a perfect Gene Simmons song, and is a favorite of mine on this CD. One, you couldn’t picture Paul singing on this track. The catchy chorus is simple, but sometimes that’s a good thing. There is some humor involved lyrically, and once the bass groove gets going, it’s a fun song. The guitar solo also adds to the song.

Even though Kulick has stated in interviews that he wasn’t an overall fan of the record, he does state that “Forever” was the shining spot on the release. The song gave the band a well needed charting single (hitting at #8 on the U.S. Charts), which they hadn’t had in a long time. The video got major airplay on MTV and other video shows that would not normally show KISS music videos. One of the things I love about the song is the drum fills Carr puts in (aka, as many as he could fit in), along with the maturity of songwriting by Paul. It was about love, but it wasn’t all about partying or sex. KISS fans also know this song as the song Paul co-wrote with Michael Bolton. Nonetheless, the song is not dated, like some power ballads were during that time.

Track eight is “Silver Spoon,” which has some good lyrics and strong melodies on it. It’s a strong song in placement, coming after a ballad, and from the several books I read in getting research for the review, Paul wanted to be taken more seriously as a songwriter, up there with Jon Bon Jovi, not just writing about sex. Whether or not you agree with his success on this album in achieving it, you can hear that influence on this track. This is a song that doesn’t get enough credit.

If I am to agree with that too many songs are one the album, this is another one that I would have dropped off the album. “Cadillac Dreams” is a Simmons-penned song about the American dream, where people with success would own a Cadillac car. The song has a 1970s feel to it, and I thought it was very similar to something The Sweet would record. Also, after coming off of a good song like “Silver Spoon,” why would you want another song similar in theme and title? “King of Hearts” has great drumming on it, just like anything Eric Carr plays on, and this has a Bon Jovi-style to it. This is better than “Cadillac Dreams,” if I were to chose one of them to be placed on the album and one to drop.

The next two songs, “The Street Giveth And The Street Taketh Away,” and “You Love Me To Hate You,” are songs that have the same complaint as I gave earlier. Why have another street song, when you succeeded with the wonderful “Hide Your Heart?”  “You Love Me To Hate You” has some nice things to it, especially Paul‘s voice on the verses, but the production isn’t the best. As a listener, I’m waiting for a big build up in the song, and it never happens. Kulick‘s guitar solo is weaker than on other tracks as well, almost feeling like this was the demo just thrown on. “Somewhere Between Heaven And Hell” is one of the better Gene songs. The solo on this is good, and the song has a nice groove to it.

“Little Ceasar” is the possibly the best rare cut on the  album. Eric Carr sings lead on the song that he co-wrote, where the title is taken by a childhood nickname he had. Eric Carr was my favorite KISS drummer, and my all-time favorite drummer, period. The fact that he got not only a co-writing credit on here, but got to sing lead, is an achievement in itself. And you know what? It’s a great song on top of it. There have been rumors that Carr played all the instruments on the track, and if it is true, I’m not surprised. Many don’t realize that he played guitar and bass (he played bass on “I Still Love You” from 1982), and his solo CD released by his family showed his talents at being more than just being an awesome drummer. Even though many had a problem with him singing “Beth” on Smashes, Thrashes and Hits (which I state my opinion in the retro review of it from this site), fans could not be disappointed in this gem. It’s great to see him shine, coming from this fan, on an album.

The final song, “Boomerang” is a speed/thrash song that is nice to end the record on. I usually like songs that end strong on an album. However, the lead into the solo makes the song sound too much like a demo pieced together. In reading about this album, Kulick stated that Paul hated songs like this, but Gene loved the song.

The overall question pertaining to the complaints about the record is, do KISS fans want an hour long CD that has some filler in it looking back now that we know we no longer have a bunch of Carr‘s work, or would we rather have maybe seven songs of solid work on it? I wonder if “Little Ceasar” would have made the cut overall if the label made them cut five or more songs off of the release. I would hopefully say it would stay on. Historically, the album was the last work we had from an amazing drummer and vocalist in Eric Carr. Even though the run time and lack of quality production throughout is there, does Hot In The Shade deserve the Music From The Elder scorn that it has received throughout the years?

Kiss – Rise To It