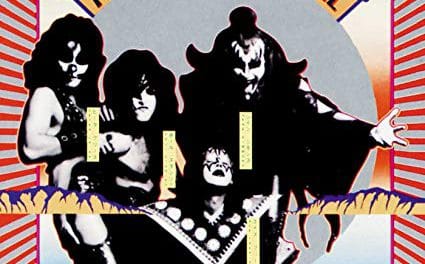 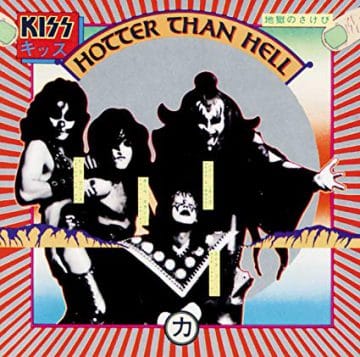 Review:
Most music critics talk about the sophomore jinx when it comes to albums. An act may have a great debut album, that took many years to get signed and use songs that they have been playing for years. When it is time for the second release, some fall flat, but there are many legendary acts that made great second releases — Mötley Crüe, Skid Row, Poison, Rush and Van Halen all had great second albums. One second album that gets overlooked in my opinion is Hotter Than Hell.

After supporting their debut album on tour, KISS were sent back into the studio by their label to get another one done. Several KISS fans will know the stories behind the scenes tales during this recording — taking the band from New York to California to record, Ace Frehley crashing his car during the sessions (which affected the photo shoot for the album), and Paul Stanley having his guitar stolen. Both Stanley and Criss write in their books that the latter threatened to quit the band during the making of the album (Criss states he would not have done it, but some books state otherwise). Nonetheless, the band attempted to make a heavier album than the first one. The cool cover photo of the band, with its oriental symbols and look, showed that KISS were not just going to take over North America, but take the world over.

The opening song “Got To Choose” is a good song to start off the album. On the first record, a more up-tempo “Strutter” started the album. Here, the slower, darker song creates the mode for most of the album. Paul Stanley wrote that he was inspired by a band recording a Wilson Pickett song, which led to him taking the idea and writing a song for KISS. The vocals throughout the song add the appeal to the song as well. A newer life for the song was created when the band used it on the 1995 MTV Unplugged show and CD.

One of the heavier songs in the KISS selection (especially the original members) is “Parasite,” which has been covered by many bands, including Anthrax and Sebastian Bach. The song, written by guitarist Ace Frehley, was given to Gene Simmons to sing because of Ace‘s insecurities at the time as a lead singer. The guitar groove shows the song is not anywhere near the glam rock style that some fans think of when mentioning the band. The drumming by Criss also gives the song a heavier flavor. This is not a speed metal song (this was 1974 remember), but still heavy enough. This one of the best Ace penned songs from his KISS years.

Another song that got new life from the Unplugged album is “Goin’ Blind,” a song that was from the pre-KISS days under the band Wicked Lester, which Stanley and Simmons turned into KISS. The bass playing on here adds a special touch to it, along with Ace‘s solo. Some fans argue that the version by band The Melvins is better, but I disagree. That version is too slow for my tastes, and I love Gene‘s singing lead on this. I can’t think of another one of the members singing this song but The Demon. This is also one of the songs that shows a darker tone to the album.

Track four, “Hotter Than Hell,” is so good that it was re-recorded for the 1978 classic KISS movie, KISS Meets The Phantom of The Park, under “Rip And Destroy.” I am being somewhat comedic stating the movie was a classic, but I do enjoy the film (and if you haven’t heard Chris Jericho‘s podcast episode on the film, it’s a must listen). The drums carry this song for the most part, and is a great song for Stanley to sing. A goal on the early KISS records (before Alive!) was to capture the band’s power and intensity from their live shows and transfer it to the records. This is a song that one could picture Stanley dancing to with his showboating, frontman style that he became known for. The song is around three minutes long, and has a groove to it, which Stanley was inspired by the band Free. Lyrics like “She’ll leave you well done,” and “Burn you like the midnight sun” may sound a little bit simple, but it works.

One of the concert staples for the band throughout the years has been the next song “Let Me Go, Rock ‘N’ Roll,” an up tempo song that was left off the first album, but found its way on this album. Even though it is lighter in tone compared to the rest of the album, the placement of the track fits perfectly. The whole album could not be all dark and broody, and this lightens the mood, to where this could be argued that it’s the early attempt to create a rock anthem, and get some radio play. The proof is that this song is still brought out decades later in their live performances shows that it has stood the test of time. I like the bass guitar bend in the opening as well before kicking into the solid drive of the song. One of my favorite rare KISS songs, is the Simmons sung “All The Way.” The song has several breaks in it, not sticking to the normal rock beats. The song kicks into a catchy sing-a-long and groove during the chorus gives the appeal to me, while still maintaining a darker tone that’s throughout the album. The lyrics also give a different tone to the relationship theme in songs.

The next song is the great “Watching You,” which was inspired by the 1954 movie Rear Window with Jimmy Stewart and Grace Kelly, directed by Alfred Hitchcock. The movie is about a photographer with a broken leg watching the people in his building and witnesses a murder. I like songs that are inspired by horror films, and one of the reasons I am a Gene Simmons and Alice Cooper fan is because they incorporate their love of movies into the music. Another song from the Wicked Lester days, the drumming is great, with Criss playing nice cowbell fills, along with Stanley‘s high note during the second verse. The song has a dark tone, but still has a dance style feel to it (almost like a snake coming out of a basket).

This album has many great rarer tracks on it that some that only know the hits by the band need to dig deeper into, such as “Mainline,” with Criss singing lead. This may be one of the songs that has the most bluesy guitar playing, ala the Rolling Stones style. This is also more radio friendly than most of the album. I remember my best friend growing up, who was not a KISS fan (except for the Dynasty album and the song “Hooligan” from Love Gun), loved singing this song. He hated songs that had a pop style to it, but he always dug this song. In my circle of friends, it showed how the song was catchy even to someone who hated that style.

Track nine is a song about living on the road and being at a different town every night. “Comin’ Home” started the Unplugged CD, and brought a new fan base to the song for those that were not familiar with the song before that. To me , the Unplugged album was not just great because it showcased the actual talents of the songwriting and skills of the KISS members (yes, I know only two original members played most of the show, but still). It also got newer fans to go back and dig some of these songs on the back catalog, like me. This song was written by Frehley and Stanley, and is a different type of road song for the band. Usually the band had the theme of “We are coming to take over your town. Lock up the daughters and hide the children” type tone to the band. However this is being tired of the road, where all the hotels look the same, and the band is busy all day until they hit the stage, and can’t wait to come home. It’s a different take on living on the road, especially for the early days of the band.

The final song is “Strange Ways,” another song sung by Criss. This is the song where Paul and Peter both state in their books that caused friction, where Peter wanted a huge drum solo on the song, and Paul and Gene cut the solo out of the song, with Criss threatening to quit the band. This song keeps up with the darker toned style of the release, which finishes the album strong. The song has a creeping rhythm to it, which fits with the album cover, especially with The Demon Simmons looking menacing, like he did on most albums. You can hear Simmons very clearly with his backing vocals during the chorus. For those parents that were aware of the band in the early days were in shock of these characters, especially the blood spewing and fire breathing. Ace‘s guitar work is just plain wicked, which also gave a great appeal to it. Visually staring at the cover, while listening to this song, I am sure freaked many people out in 1974 (I was only one year old at the time, so I wasn’t a part of the first wave).

It’s a shame that more people don’t list this release as one of the great second releases, and I’m not just saying it because I am a fan of the band (even though I’d rank it in my top five of all of the band’s albums). There is not a bad song on here to be skipped; with wonderful musicianship that even fans of a darker style of music may enjoy this album as a whole (as opposed to the Carnival of Souls release by the band from 1997), and each song is the right length. Although I think Revenge may be the heaviest of the band’s work, this may be a close second.  Since the band did not have a huge following when it came to selling records until 1975 (and Bogart asked to be released from Warner‘s distribution deal when the record was released), the album goes unnoticed by many.

One complaint about the album to some is the production value seems to be similar to a demo instead of an actual album, but that gives its appeal; it’s rare, dark, and heavy. The sound gives the creeping, stalking feel which gave the message that KISS was coming in the night to take over the world as the ‘Hottest Band in the World’ so much so that they were even Hotter Than Hell!

KISS performing “Hotter Than Hell” live at Winterland in 1975:

The First video of my first serie videos “Early KISS Remas!” in this serie you will found remastered early KISS videos in excelent video and sound quality! KISS live @ Winterland, California. one of the first KISS concert’s film in great quality, in this show KISS was the opening act of a band that i don’t remember the name.