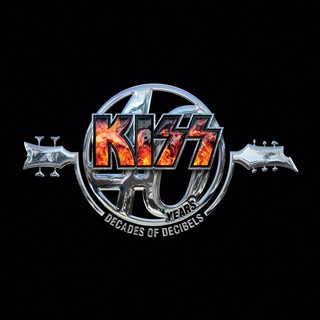 Review:
KISS possibly holds the record for most greatest hits and compilation albums released by a hard rock act. With over ten such albums over the span of 40 years, KISS are unfortunately milking their fans for as much money as they can by releasing one of these collections, on average, every four years! Believe or not, since 1997 they have actually released just as many compilations as studio and live albums combined.

Naysayers will of course argue that no fan is forced to buy everything KISS puts out — and I agree with that — however, the reality is that the band has a huge following of loyal fans, called the ‘KISS Army’, that feel compelled to own everything stamped with the KISS logo. Sometimes KISS offers a few new songs on these collections but often it is simply the same old songs repackaged in a new CD format. In the case of KISS 40, only one “unreleased” demo is provided with the rest of the record consisting of the same old, same old including “Detroit Rock City”, “Cold Gin”, “Strutter”, “Deuce”, “I Love It Loud”, “Beth”, “Shout It Out Loud” and “Rock And Roll All Nite”.

You might think that I am therefore displeased with KISS 40, but actually I welcome it. At the end of the day, however many greatest hits albums KISS puts out does not affect me because I don’t own any aside from Double Platinum (on vinyl) and The Box Set — and the latter one could arguably not be considered a greatest hits release. Do I think that KISS are tarnishing their reputation and legacy by offering so many of these compilations? Absolutely! Is it better to have a band release something rather than nothing? Absolutely! It is really up to the fans to decide whether they will support KISS and their latest greatest hits endeavor.

I do admit that the KISS 40 concept is a good one. To celebrate their 40 years of existence KISS have offered 40 songs, each one coming from a different album. Although I have read a few reviews giving props to KISS for altering their usual greatest hits song selection, the reality is that they have pretty much offered their usual core set with a few different tracks. KISS‘ secret is not earth shattering — by offering a whopping 40 songs there are sure to be a few that have never made their way onto a KISS hits release before. Unfortunately, KISS are still repackaging a large amount of the same material in different formats. For example, in 2005 Gold was released which had 40 tracks from KISS‘ 1974 to 1982 era — and by my count, twenty of those have made their way onto KISS 40 in one shape or another. Fifteen of the 21 songs on The Very Best Of KISS, and twelve out of the 15 on Smashes, Thrashes & Hits, can be found in some form on KISS 40… You get the picture?

Given that there is only one unreleased song on KISS 40, there is not that much to talk about that has not already been said. “Reputation” is the most intriguing track given that it has never been released by KISS in the past. The demo is a classic upbeat Gene Simmons penned and sung tune that would have fit very nicely on Rock And Roll Over or Love Gun. The “God Of Thunder” demo performed by Paul Stanley is a nice addition as it is only available via The Box Set, which is likely harder to find than some of KISS‘ other releases. If anything, it makes you appreciate how Simmons really takes the song to another level when he handles the lead vocals on the version that was ultimately released on Destroyer and Alive II. There are also three live tracks that originate from the hard to find albums KISS Instant Live (“Deuce”), Alive 35 (“Cold Gin”) and Sonic Boom Over Europe (“Crazy Crazy Nights”). After those five tracks, it really comes down to whether you like the song selection of KISS 40 and want to pay to receive the same hits you likely already have.

What I would really like to see from KISS is value for money. They have certainly delivered on occasion with releases such as KISSology and Sonic Boom, which included a bonus KISS Klassics CD and live DVD. Unfortunately, KISS 40 does not represent value for money. Rather than releasing yet another greatest hits package, KISS should have delivered their long awaited KISSology Volume Four: 2001-2012. While KISS are putting their fans first with each KISSology release, each of the band’s greatest hits albums — including KISS 40 — feels like they are trying to cash in without putting in much effort.