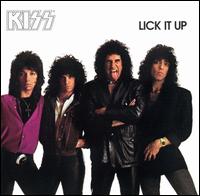 Review:
With sales on the decline, Kiss had to do something radical to hype their new album, and removing their trademark makeup would be that something. Lick It Up marked the album Kiss did sans make up and was also the first full-length studio album to feature new guitarist/songwriter Vincent Cusano (better known as Vinnie Vincent). Musically songs like “Lick It Up” (#66), “Not For The Innocent”, “Young And Wasted” and “All Hell’s Breakin’ Loose” really rock!

Not surprisingly, Kiss went all out promoting the new makeup-less image by going on MTV, making videos and touring — and the plan worked like a charm. Rejuvenating their careers, Lick It Up would help Kiss regain their footing in the metal genre as they went on to sell millions more albums. Although Lick It Up gave Kiss the creative boost they needed, it would turn out to be Vincent‘s final album with the band. I also want to note that we lost drummer Paul Caravello (Eric Carr) on Nov. 24, 1991 due to cancer; he is greatly missed by us all. Lick It Up is a return to form, and gets two thumbs up!