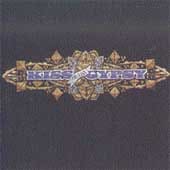 Review:
Kiss Of The Gypsy is the debut disc from this English quintet, formerly known as Fantasia; this band’s album JAMS!

With rockers such as “Easy Does It”, “Infatuation” and “Keep Your Distance”, the music speaks for itself. There is also a good ballad called “Take This Old Heart”. The style is hair metal with a tinge of blues-rock.

This was released in 1992 at the tail end of the metal movement, and despite the band having the goods to be big, unfortunately it didn’t fair well. Two thumbs up for Kiss Of The Gypsy!