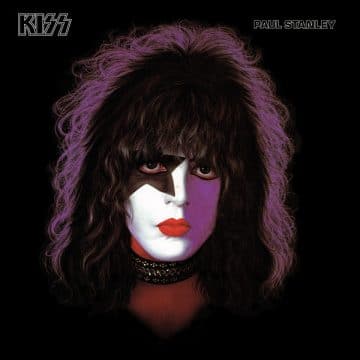 Review:
Out of the four KISS solo albums released simultaneously in 1978, perhaps Paul Stanley’s comes closest to not only fitting in with the KISS sound of that period but also his own future KISS style with a nod to what fans would hear on tracks from KISS releases such as Killers and Creatures Of The Night. While not taking too many chances by sticking close to what fans dug from him in KISS, Stanley more than compensated by delivering a complete album filled with consistently strong original tracks, which makes his the only one of the four not to include a cover song. While it’s true that, aside from ballad “Hold Me, Touch Me”, the Starchild took an easy no-brainer approach to his first solo attempt, it can be argued that to that point, Stanley pretty much delivered the range of musical output that he was comfortable with anyway.

Yeah, it may not be the most diverse or even stray that far from his typical KISS offerings but what is presented on Paul Stanley is a 1978 formula dressed up with hints of where his star would take him. For the length of nine songs, those hints turned out to be pretty cool. More substantial than Gene’s, more rock and roll than Peter’s, and more serious than Ace’s, the debut solo release by Paul Stanley was despite sounding very KISS-like, perhaps the most “solo” of the four in terms of what a solo release should be — totally artist driven. Where Gene wanted to showcase how Hollywood he was, Peter wanted to flex that chip on his shoulder, and Ace looking to just prove he could do his thing while barely standing, it would seem as if Paul just simply wanted to create an album for himself based on his first offering.

Starting off with stellar track “Tonight You Belong to Me”, Stanley even kicks things off his own way choosing to set the pace for his premiere solo outing by building up from a slow sweet spot before hitting the launch pad with full on raw guitar. Setting the tone for the tunes to come, Stanley refuses to save the best for last instead opting to put possibly the album’s strongest track up front and center, which on a record filled with strong tracks is saying a lot. “Tonight You Belong to Me” is one of those KISS related songs you wish you could hear live way more often from Stanley or even KISS and offers a touch of sounds to come in the ’80s. It also starts a mini-trend on the album which finds Stanley going to the “I Want You” style well of starting a song off slow and eventually powering in full force. It’s a method that Stanley successfully uses on equally incredible “Take Me Away (Together as One)” and to a degree, “Ain’t Quite Right.” But as much as melody is visited on Paul Stanley, the Starchild doesn’t forget to include the straight to the point rockers.

Following hot on the heels of the opening track, “Move On” is forward thrusting Stanley KISS rock and roll culled straight from the Rock And Roll Over / Love Gun period. Half catchy, half driving, and all anthem as only Stanley can deliver, it’s a pretty solid tune that only suffers from being slightly less cool than the charging “It’s Alright” and the brilliantly kick ass track “Wouldn’t You Like to Know Me” which in my opinion stands as pretty close competition with “Tonight You Belong to Me” as the best cut on the record. Then again, it’s hard to pick a favorite track with so many good ones and if memory serves me correctly, back in 1978, my fave song changed almost daily!

Successfully blending melody and power over and over again, Stanley officially drops the gauntlet delivering the most beautiful of ballads with “Hold Me, Touch Me (Think of Me When We’re Apart)” showing that he can work the soft side as well as anyone in pop or rock circa 1978. As soft as it is sincere,  it’s every bit as good as any love song that hit the top 40 charts at the time but unlike many other love song creators in the late ’70s, Stanley reminds just as quickly that he first  and foremost can rock as good, if not better than most by finishing off with guitar-driven anthem “Love in Chains” (a tune pretty much the polar opposite of “Hold Me, Touch Me”) and the appropriately titled closing track “Goodbye”, a song that rocks is a different sort of way compared to the usual Stanley fare.

In 1978, with the ’80s just right around the corner, Stanley (and KISS) couldn’t have predicted the influence they would have on the upcoming decade of hair metal artists but forty years after its release, one has to wonder if maybe Stanley didn’t at least have an inkling of the sounds to come. His solo debut could have easily fit in with popular releases in the ’80s which can’t be totally said about his bandmates 1978 solo offerings. From the first track to the last, it’s as good as anything the band released after 1978 and certainly better than any KISS-related solo releases other than maybe Ace’s 1978 album and that includes anything by Frehley’s Comet, Peter, Gene and Paul himself.  And while it can be argued that Ace’s sold more copies, it has to be said that even though the Spaceman’s is a stellar release, quantity doesn’t always make something better than quality, and Paul’s definitely is a quality release from start to finish.

Paul Stanley performing “Wouldn’t You Like To Know Me” on One Live KISS DVD:

Wouldn’t You Like To Know Me? – Paul Stanley – One Live KISS