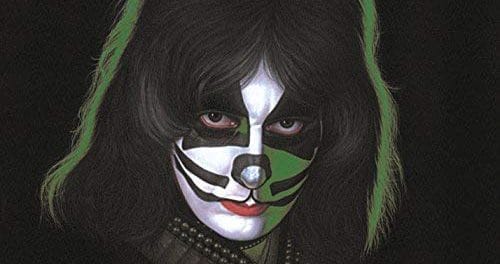 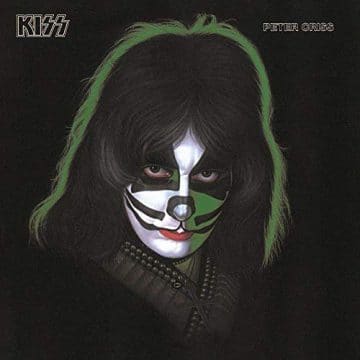 Review by John Stoney Cannon:
Despite great songwriting and performances that dig deeper into the heart and influences than his bandmates’ companion solo releases, Peter Criss’ 1978 KISS solo album over the years has received the most criticism from KISS fans. Forty years on, it’s easy to see that at the time this was perhaps more due to the fans’ refusal to accept anything other than KISS smacked rock and roll on anything put out by the band including “solo” releases even though similar styled albums by raspy-voiced soul artists like Bob Seger and Rod Stewart were popular at the time. It’s possible that in 1978, these same tunes could have brought Peter Criss chart success had he not been connected in any way to a rock band such as KISS. Unfortunately for Criss, KISS fans weren’t interested in hearing his more serious side, and serious rock fans weren’t willing to take anyone from the band KISS seriously as an artist. Making this even more humorous is the fact that two of KISS’ better-selling tunes, “Hard Luck Woman” and “Beth”, were both sung by Criss and closer to his solo album tracks than just about anything else released by KISS to that point.  While the Catman’s 1978 offering is perhaps not as rock and roll cool as the albums also released on September 18, 1978 by bandmates Ace Frehley, Gene Simmons and Paul Stanley, it remains a solid debut solo release by Criss and despite moving on to a post-KISS solo career, one that to this day Criss has yet to top in terms of quality songs and performances.

Starting off with soul rocker “I’m Gonna Love You”, Criss jumps right into Bob Seger territory and does it very well. Catchy and filled with the same kind of raspy blue-eyed soul Seger was successfully known for (including album Stranger In Town released earlier in the same year), it wouldn’t have been surprising to find tunes like the “I’m Gonna Love You,” “Rock Me Baby” or “Hooked On Rock ‘N’ Roll” on the charts. Sadly for Criss, his success in KISS may have been a detriment for his brand of success outside of the band. Looking back, it seems kind of odd that in an era where rock and roll radio and concerts featured a wide mix of everything from Aerosmith to America, KISS fans, who would more than likely party just as hard at a Bob Seger concert, were not as accepting of a member of their favorite hard rock band flexing his soul rock muscles outside of the band. It was OK for KISS to release a song like “Hard Luck Woman” but for anyone in the band to put out an album of similar tracks on their own?  Forget about it!  It’s a shame because Peter Criss is a solid album with some pretty good tunes. It’s just not your usual “chicks, kicks, and rock and roll” fare that KISS were known for.

“Hooked On Rock ‘N’ Roll” could be considered Criss’ own ode to early rock and roll much like Seger’s “Old Time Rock and Roll” (one of four singles on Stranger In Town) and follows the same blues / soul dance boogie as “I’m Gonna Love You” while “That’s the Kinda Sugar Papa Likes” is cut from the same type of ’60s girls group fabric as much of Seger’s material as well. The continual nod to a more motor city soul sound is a fixture also found on solid tunes “Rock Me Baby” and Criss’ rendition of Bobby Lewis’ “Tossin’ And Turning” but more so than his bandmates, Criss also visits a more mellower side of his musical palate.

“You Matter to Me” could have easily been a hit for the similar vocal style fronted yacht rockers the Doobie Brothers while “Don’t You Let Me Down,” “Easy Thing” or “Kiss The Girl Goodbye” might have been chart gold in the hands of artists such as America or Rod Stewart.  This had to be frustrating for Criss who had to believe that he was releasing a solid album filled with exceptional songs and performances but maybe the biggest frustration had to be found in the lack of attention to the album’s closing song.

Clocking in just over four minutes and filled with a piano melody every bit as perfect as any hit ballad of that time by The Eagles, Billy Joel, Styx or Foreigner, dramatic ballad “I Can’t Stop the Rain” is a musical masterpiece and while not anywhere in the area of dirty, fun, sex, drugs, and rock and roll, is not just an incredible composition within a list of KISS songs, but is worthy of standing toe to toe with great songs found on any list of songs from that period of music. The theme is universal and the wordplay clever and the hook is not far removed from another similar KISS-related ballad — 1989 single “Forever” off of Hot In The Shade. Once again, released by someone else, possibly a top 40 smash.

KISS fans in 1978 were pretty vocal in their preference for the bands other 1978 solo releases, particularly Ace’s, and over the years that has pretty remained the case but it seems that just as time has lifted KISS’ Music From The Elder album to a more appreciated status, the same can be said of Peter Criss. While it will probably never get the same love from KISS fans as Ace’s or Paul’s 1978 albums, it can be said that while both are awesome, neither were as adventurous or veered from the safe bet of sticking close to the popular KISS sound as Peter‘s which even with Gene offering up his version of “When You Wish Upon a Star” stands as the most experimental and non-KISS rock and roll album of the four.

And in a way, that actually makes it the MOST rock and roll of the four.

Review by Lance Lumley:
The history of the KISS solo records is mostly remembered for being a saving attempt to keep the original line-up intact. Most KISS fans have their own favorite release of the solo records, and compare each one to the other as to which release was the best. What most fans got was something mostly different from the normal hard rock songs that the members were known for, especially the release from drummer Peter Criss.

Criss grew up with a big band sound and influence on his drumming, and was not really a hard rock drummer, but his style was unique in the KISS material. This solo attempt was more a R&B/soul type of music. The first track “I’m Gonna Love You” is a nice opener to the record with a pop sound with horns. The song is something Rod Stewart may have put out, and is a nice up-tempo opener, even though the chorus falls flat in the flow of the song. Track two “You Matter To Me” has the 1970s feel to it, with synthesizers and keyboards in the background, and again (which becomes a theme throughout the release), the lyrics have an awkward flow at times during the songs.

The third track is my favorite on the album. The song is a remake of the 1961 hit by Bobby Lewis called “Tossin’ And Turnin’.” The arrangement of this classic is slower and has more of a R&B feel to it. I remember playing this version in a cover band I was in, and it got people dancing and we had many positive comments about how they liked this version better than the more faster original. There should have been more songs like this on the album, because Criss shines vocally on this one, as well as keeps a steady tempo on the drums. “Don’t You Let Me Down” is a slower song but is a surprise for me. The song has a structure like Solomon Burke‘s “Cry To Me” song from 1962. The early R&B /soul songs fits Peter‘s voice perfectly. This is the hidden song that is my second favorite on the album.

Track five is called “That’s The Kind of Sugar Papa Likes.” Besides the humorous title — remember it was the late 1970s, so songs had titles like this in the soul genre — the music is more fit to the teen idols, such as Shaun Cassidy or Leif Garrett. The chorus comes in an odd time right after the chorus, but the music is typical 1970s. “Easy Thing” is a slow ballad where Criss seems to be singing higher than his voice can handle at the beginning when it is just vocals and the acoustic opening. Once the rest of the musicians come in, the song is a little more pleasant, but it reminds me of a bad version of an Air Supply song. “Rock Me Baby” is another 1970s pop song with the piano driving the rhythm. The lyrics are cheesy to me, with “Rock me til I’m ready to rock.” Again, the verses run straight into the chorus and make an awkward feel to the flow of the song.

After an up tempo song, the album is back to another ballad. “Kiss the Girl Goodbye” is a song where the percussion in the background seems to be playing another song, and almost distracts me from listening to the song as a whole. It isn’t until the end of the song where the lyrics talk about kissing the girl, instead of being in the chorus throughout. “Hooked On Rock N’ Roll” has a nice guitar solo from Steve Lukather, but the lyrics seem to be jammed in there from the flow of the song and especially when the song gets to “I was vaccinated with a little needle/and I’m hooked on rock n roll”. The last track ends with another ballad. “I Can’t Stop The Rain” has a nice piano opening , but I wonder what KISS fans felt when they got through this album filled with mostly mellow songs from (at the time) one of the best rock drummers in music.

Overall, there are only three songs worth listening to in my opinion. I like ballads, maybe more than most rock fans, but the lyric structure is constantly meshed together at times that doesn’t fit the flow of the songs. I was not listening to KISS when the solo records came out, but I wondered what the feeling was when the fans got through playing this one on their turntable at the time.