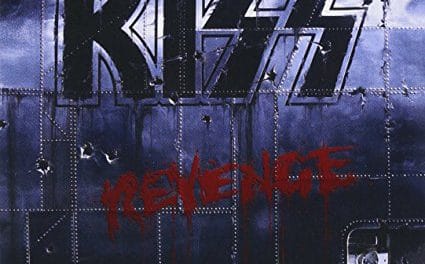 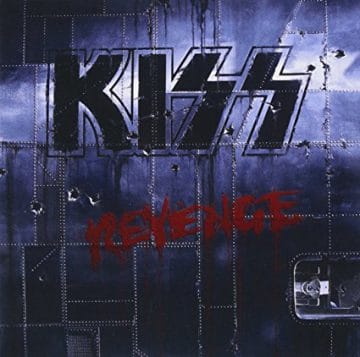 Review:
May 1992, KISS come storming back with Revenge. And for myself, storming would be the word as even though I was still buying all their releases, their studio output in the ’80s was questionable! Now, don’t think for a second I’m a scorned ex-jilted KISS fan. Nope! Now, for the duds in the ’80s, there were some real awesome albums (Creatures Of The Night), not bad (Animalize) and some that have gotten better over time (Lick It Up).

Who know’s what I was thinking when KISS unleashed Revenge. I guess I just viewed it as another new KISS album as there were already like 100 or so studio, live, greatest hits comps out there… I was certainly surprised when KISS along with producer Bob Ezrin stepped up and slammed one out of the ballpark! So Starchild, the Demon, Kulick and Singer create what I would have to say is close to one of there best studio outputs ever. Plus give props to the cover, a slick looking were taking no shit kinda cover! Metallic silver menacing wall slapped with a big bad ass looking bolts with a KISS painted black logo over it. Heavy…

God gave rock n’ roll to you… I gave tons of cash to KISS!

“Unholy” — Holy heck! KISS in 1992 sound leaner, meaner and with the guitars doing some weird kinda backward maskimg thingy for a few seconds comes some big power chords courtesy of Paul Stanley and Bruce Kulick. Eric Singer‘s bass drums sound huge like cannons peeling off and could it be…. say what? Gene Simmons begins the album with his own song and it’s not a Stanley track as well it’s heavvvvy devvvvvvy! Gene sings like he has gone overboard and is about to be committed to the looney tank and man I’m digging it and I still do all these years later. The KISS sonics here and on this album are produced so good. Take a bow Mr. Ezrin!

“Take It Off” — You didn’t think you were gonna get two Gene tracks off the bat did ya? Nope! Here’s Paulie Stanley with a real good song musically but lyrically its a throwback to 1988! You know the lyrics — they go something like this “mind is getting dirty around 11:30. Uh huh! Shake your hips yada yada toss your panties. Uh huh. Blah blah!” I mean, yeah OK, even back when Revenge came out, I was 24, KISS were just all turning 40! This song lyrically bores the tar out of me. Like I said, great music, cool use of percussion and good solo but dumbo corny lyrics that shoulda stayed in the ’80s!

“Tough Love” — Now were talking Mr. Stanley! A way better tune lyrically than “Take It Off.” I love the sleazy heaviness of the guitars, kinda gurney, but not overcooked to the point of the “sound” at the time! Love the beginning of this track where the band and especially Singer take control! The verses are real good, chorus is real good and Kulick is rocking the crap outta his guitar!

“Spit” — Sleazy Simmons pulls off some real cool Spinal Tapisms lyrically in this tune. The lyrics are goofy but it’s catchy! Singer ploughs some double bass drumming and Kulick plays a bit of the Star Spangled Banner in his solo. Hand it to Gene — he steals Stanley‘s thunder in the hokey writings of rock when the Demon sings “You don’t mean spit to meeeeeeee!” Ha! What’s even funnier is Stanley knows this as he takes over the pre-chorus vocally like Starchild is saying “Gene let me be a part of your ’80s leftover lyric rock schlep!”

“God Gave Rock N Roll To You” — I heard this song a year earlier when KISS recorded this track for the Bill And Ted Soundtrack! It’s a good song. No doubt a cover tune (Argent) no less but Gene, Paul, Bruce, Singer and late great KISS drummer Eric Carr who provides the backing vocals for this song pull off this mid tempo steamer of a track! I like how the song breaks down almost acapella style and than ramps back up! Of course, Paulie goes into his “Believe in rock n’ roll” lingo and that’s OK as it’s May of 1992 and some bands are being kind of mopey, bummed out, strung out and hey, that’s their deal and more power to ’em! But for me, I’m OK with Preacher Paul ranting on for a few seconds. Just a few seconds though!

“Domino” — Ahhh, the Demon totally steps up! This Is a great fuckin’ track! Love the beginning with just Kulick and Singer and Gene when he tells “you my story!” This song is possibly at any given time when someone brings up Revenge a fave Demon tune! My pal Rockin’ Roberts digs this tune immensely and the only KISS he owns is a double greatest hits comp but it has “Domino” on it. So there ya be! Gene man totally steps up and the rest of the guys play it perfect. It’s not over done. Gene himself restrains himself and sings a chill vocal, almost a throwback to his singing on theeeeeeee fabulous Creatures Of The Night release ten years earlier (1982). Kulick does a real cool solo and yeah, it’s all here folks! But yeah, this has to be one of the best KISS concept vids ever in my opinon. Love that the ol’ buzzard Simmons is just cruising around in a car and the other three dudes are locked up in a jam shack! There’s quick shots of Starchild playing the Demon‘s bass.

“Heart Of Chrome” — Good Stanley track. It seems he and Gene pushed each other hard on writing good hard rock material for Revenge. Great Kulick solo and drums by Singer…

“Thou Shall Not” — Another stand up Simmons rocker! Great tune and KISS ’92 are firing on all four cylinders. Simmons knows his deal on this record and it’s writing rockers, good ones at that and is Simmons‘ strongest record with material since 1982!

“Everytime I Look At You” — Yeah, OK but this song is right out of place on this album. Revenge is a big ass rock record. Look at the cover and the songs are heavy and boom this appears? Stanley goes down wimp ville and spews out this track. Hey, if you like it, God bless ya! Not my deal man. Stanley, if he had to, should have written a tune like “Million To One” from Lick It Up! That’s the kinda track that would have worked on here.

“Paralyzed” — Simmons kicks the sappy “Everytime I Look At You” track to the curb and ramps it back up with “Paralyzed.” A heavy mid tempo kinda tune! Thanks Gene for picking up Stanley‘s lack of judgment and booting some good ol’ hard rock up everyone’s ass! Singer and his drums move this song along folks. No bull! Just hard rock!

“I Just Wanna” — Stanley writes a catchy heavy rock track that kinda jingles around in the upper registers in my noggin’ after I listen to it…. I just wanna forget yoooooooou! This is Starchild‘s kinda tune. I like the song, the lyrics albeit kinda funny, but that’s OK ’cause as I stated earlier. there were a lot of serious rock acts out there and hey, I’m a casualty from the ’80s and thanks to Stanley, he tosses me a life line with this song! Of course, with Stanley and Simmoms tossing me a lifeline would come with a fee! Kulick lays down some decent soloing and the middle part breaks down acapella style and they pull it off….

“Carr Jam 1981” — Cool tribute to Eric Carr who passed away in November 1991. “Carr Jam” is a track that Kulick adds guitar to pay homage for their fallen band member! Carr was a fantastic drummer!

In conclusion, KISS storm back after the blah Hot In the Shade from 1989 and just about put out what I would consider the ultimate KISS album. It would be if Stanley hadn’t plopped that mush…. Actually, Vinnie Vincent has a bunch of co-writes on this album and I think it gave KISS that extra boost (not that they would admit it) when I say it’s their best album since Creatures Of The Night and that Lick It Up has grown on me over the years! Whose paws were all over the playing and writing of those two records? Yeppers, Vinnie was… Food for thought….

Reviewed by Deke for Sleaze Roxx, May 2017

KISS‘ “Everytime I Look At You” video:

Kiss – Every Time I Look At You

Music video by Kiss performing Every Time I Look At You. (C) 1992 The Island Def Jam Music Group#Kiss #EveryTimeILookAtYou #Vevo