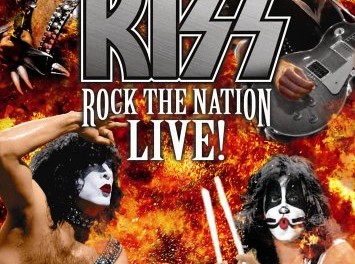 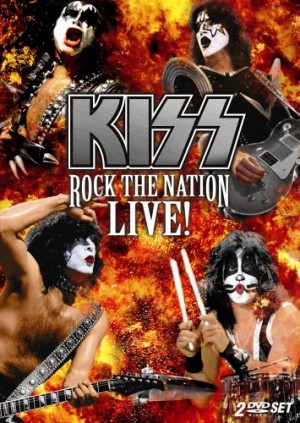 Review:
With the 10th year anniversary of the release of KISS‘ Rock The Nation Live! DVD upon us today, I thought that this would be a great occasion to revisit and review (the word has two meanings this time around) this DVD. The funny part about Rock The Nation Live! is that if I had reviewed this release when it first came out, I would have given it a better review than I will give it at this time. The reason for that is simply that since the release of Rock The Nation Live!, KISS have released their Kissology DVD series which makes the former simply pale in comparison to the latter both in value and content.

Putting aside the excellent Kissology DVD series, Rock The Nation Live! is actually a solid release. You have band members that seem to be really gelling and enjoying playing with each other. You have a varied setlist with songs like “Makin’ Love” and “Love Her All I Can” from deep in the KISS catalog of songs as well as “Unholy” and “Tears Are Falling” from KISS‘ non-make up days. Two of my favorite KISS songs — “I Love It Loud” and “War Machine”  — made the cut on Rock The Nation Live! so I am good! Sure, there will always be naysayers that find that such and such a song should have been included. However, if you think that KISS have released 22 studio albums (including the solos albums in 1978) by 2005 with about ten new songs on each release, this means that KISS had about 220 songs to choose from. So KISS get props for an exciting and varied setlist on their Rock The Nation Live! DVD. Paul Stanley also sounds like the Paul Stanley that I have in my mind and not the surprisingly older and tired voice that can’t hit all the notes anymore that I was subjected to during the last time that I saw KISS perform a little more than a year ago.

The bonus features on Rock The Nation Live! are underwhelming at best. My favorite is the “intimate” but apparently rather short show that the band played at the Palais Theater in Melbourne, Australia where you are treated to only one song from that concert, albeit a deep one and older one from the KISS song catalog. Seeing KISS in make-up playing on such a small stage ten years ago was rather cool as well. While the whole Powervision camera bonus feature — which allows you to follow one band member in particular for selected songs — is a cool idea, the reality is that I had never checked it out until today (ten years after its release and since around when I bought the DVD) so obviously, this feature has never really appealed to me that much. The one annoying feature of Rock The Nation Live! is that a lot of what should be “bonus” features are actually included in the main portion of the DVD. There is no question that the documentary portions on the DVD from “The Dressing Room” to “Soundchecks” are interesting and entertaining to watch but why include and spread them out in the middle of the concert portion of the DVD? Those documentary snippets should have been part of the bonus features and definitely not part of the concert itself.

One pet peeve of mine is that although I never seem to have a problem seeing Eric Singer donning the Peter Criss‘ cat make-up, I always find it uncomfortable watching Tommy Thayer in the Ace Frehley‘s spaceman make-up. I think it’s because Singer looks a lot like Criss but Thayer‘s slim and tall built with different facial features make it obvious every time that I see him that this is not Ace Frehley!

Overall, KISS‘ Rock The Nation Live! is a good DVD but one that simply pales in comparison to the next three DVDs that KISS released — those mystical Kissology series. KISS are the author of their own misfortune on this one having raised the bar so high with their Kissology DVD series that their Rock The Nation Live! DVD is simply not good enough anymore!