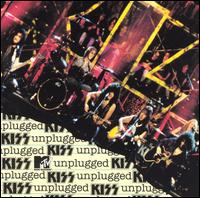 Review:
Most who attend a KISS concert describe the atmosphere as “electric.” So, it was unexpected when the band turned up on MTV’s popular Unplugged series back when MTV had music related programming or allowed artists on the station that actually play musical instruments. What was even more expected was the result. Even unplugged, this KISS performance has an atmosphere that is simply electric!

The band line up on this KISS release is the most complete of any in the KISS collection as it features the forefathers of KISS in Gene Simmons and Paul Stanley. Bruce Kulick and Eric Singer are the other two players on the unplugged set proving what many say, the KISS unmasked line up are better musicians than the original four. Speaking of the other two original members, Ace Frehley and Peter Criss make an appearance on this record performing on Ace‘s “2,000 Man”, Peter Criss‘ “Beth” and “Nothin’ to Lose”, and “Rock And Roll All Nite”. This reunion would spark the KISS boom that took place in 1997 through 2000 and the once again masked phenomena that continues to this day with Gene, Paul, Tommy Thayer, and Eric Singer.

The set list may not appeal to those who are not extreme members of the KISS Army. That is to say it may not jump out to those members on paper but will through audio. This is because the boys pull a few obscure cuts out of their collection. For example, they open with “Comin’ Home.” The average KISS fan wouldn’t know this song by name but a proud KISS Army member like myself knows it by heart. And, it never sounded better than on this album.

Gene struts his vocal stuff with “Plaster Caster” next. This is a song about Cynthia, the groupie who saw fit to make plaster casts of the PP’s of famous rock stars. Oddly, no member of KISS was ever cast by Cynthia. It’s a catchy tune though. By far my favorite penis molding song of all time. Far better than Strudel Statue by Dick and the Erections… Hey, now there’s a name for a band!

Gene also performs “Goin’ Blind”. I am sorry but I never liked this song. It probably has to do with the fact that I have poor vision. But, that doesn’t mean the KISS Army won’t like it. After all, this song is featured on the recently released Alive IV.

Paul returns to vocals with “Do You Love Me”. Another classic KISS song and it sounds great unplugged.

Gene returns to vocals on “Domino” off the 1992 released Revenge record. It is a very cool song but the most noteworthy remark I can make about it is the change in lyrics to fit the MTV standards and practices. “She’s got me by the balls” becomes “she’s got to have it all.” It’s a subtle change but noticeable to freaky looking KISS Army nerds like myself.

Paul returns with “Sure Know Something”. Carli Simon must be pissed! What I mean by that is this song is off Dynasty which is KISS‘ answer to disco and perhaps the most hated KISS album by American fans. For some reason, Australians love it. It is no surprise we have them to blame for the Bee Gees. Anyway, either I’m getting old and soft or this song transcends trends and is a fantastic song. Also performed on Alive IV, I can’t help but sing along. I assure you, Paul Stanley sounds far better than I do!

Gene sings “A World Without Heroes”. It’s another obscure KISS cut that was dragged out for the Unplugged show. It sounds pretty good to me!

Paul returns to the mic and absolutely kicks the crap out of “Rock Bottom”. This is one of my top 10 favorite KISS songs and surprisingly sounds as good unplugged as it does with explosions and blazing guitars.

Gene sees Paul‘s “Rock Bottom” and raises him a “See You Tonight”. This is another lost cut but is brought to live by the Unplugged album.

Paul calls Gene‘s bluff and in my opinion wins the battle of “best KISS singer” with his next two cuts in “I Still Love You” and “Every Time I Look at You”. Quite frankly, Paul Stanley has one of the best voices in music, not just hard rock or metal. For me, KISS is Gene‘s demonic stage antics mixed with Paul‘s amazing musical skill. Sometimes Gene overshadows Paul. Frankly, I love them both but am partial to Paul‘s fantastic singing voice. If you have to ask why, simply listen to these two cuts. Amazing!

Ace Frehley wonders on stage, perhaps in an attempt to avoid the CIA which he believes is after him though nobody seems to know why. I kid because I love! Anyway, Ace does “2,000 Man” originally performed by the Rolling Stones. Ace still has a great singing voice and really puts a lot into this performance. This is his first time back with KISS in something like 15 years so he must have been incredibly excited to have that opportunity.

Speaking of opportunities, Peter comes back with his classic tune, “Beth”. I was never very fond of this song but must admit I can’t ever keep from singing along. But, I do like Peter‘s second cut on the CD, “Nothin’ to Lose”. He is clearly having a ball with it. That is important.

The show ends with “Rock And Roll All Nite” with all four original members getting their vocals heard. KISS Army members watching at home had to be wetting themselves as they watched this. And, as I said, the KISS boom of the late 90’s took place thanks mostly to this MTV Unplugged show.

When they write the book on heavy metal, KISS should be mentioned on the first page and the final page. They are the end all and be all of what a rock band should be. They don’t allow rappers on stage, they don’t dance with boy bands, and they don’t tour with Pink. They are what heavy metal was built on. Attitude, showmanship, and high energy. Like it or not, KISS is the definitive hard rock band and this album, though unplugged, is a damn good example of why.