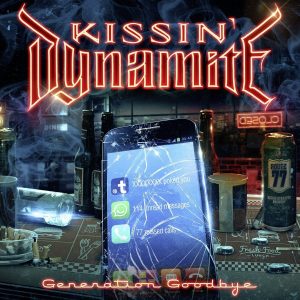 Review:
July 8, 2016 saw the fifth release from German rockers Kissin’ Dynamite. This release reached the charts at #14 in Germany and #59 in Switzerland, which the band felt was an amazing accomplishment. The album is titled Generation Goodbye and here is what drummer Andi Schnitzer had to say about the title: “We live in a time of constant accessibility, where everyone needs to know everything at any time. The wrong things are taken for too important. That’s not healthy anymore. Like this, the people get unsecure, blind and shy… Because of the fact that in terms of these things we look into the future with quite several worries, ‘Generation Goodbye’ can also be seen as an act of liberation in a way. We are the generation that can achieve something. Our generation is able to see what goes wrong and so we call for turning one’s back on this progress consciously.“

This is my first exposure to this group and I am excited to check out their previous albums, as this is the type of rock n’ roll I enjoy listening to set the right mood. The vibe of this album does take me back to the ’80s when “rock” music was the “feel good” music and not so much all the depressing music that has been coming out for the past 20 years.

These young musicians (average age of 25) have the DIY (“Do It Yourself”) attitude with this album. In 2014, they decided to drop their management and ever since then, they have been managing themselves. Same goes for the production on Generation Goodbye as they produced the album themselves. Here is what singer Hannes Braun had to say about producing and mixing this album: “We had this vision of keeping full control this time in terms of the sound we exactly wanted. Thereby, we had the freedom to deliver the truest, most authentic and most genuine album for us, totally without any pressure or compulsion from outside.”

The title track “Generation Goodbye” starts off with a catchy drumbeat, from Andi, with the chanting of “Hey” that will get you clapping your hands in the air. Then the guitars, bass, and vocals kick in and it is good time rock n’ roll from here on out.   Hannes has a voice that just sucks you in with the music. Steffen holds things together with his bass. Jim and Ande show off their amazing guitar skills with the riffs and solos. The lyrics make me think of the longing and break-up the music scene has had for this kind of rock music. Yes! There are a lot of bands releasing this type of music, but it is still underground to an extent and it would be nice to see it explode again like it did in the ’80s, but not so saturated like it was.

The next track, and one of my favorites on the album, is called “Hashtag Your Life.” This is a song filled with some great riffs and little guitar solos between the verses. The bass and drum beats will have you banging your hands on the steering wheel and lyrics that will have you laughing a bit. As the title indicates, it is a song about how people’s lives are controlled by social media. People just can’t get away from social media and need to tell everyone what is going on in their lives, or people need to know everyone else’s business. The lyrics are filled with common words or abbreviates that we use when posting something on our social media pages. Part of the chorus has the line, “I’m gonna like it, like it, like it all along” like people would do with a Facebook post they “like.” Another line I really think is fitting is: “You’re caught in your cyber cocoon, while wasting away in your room.” I find this to be very true as far too many people will just sit at home and spend their whole day on social media and not spend quality time with friends or family.

“If Clocks Were Running Backwards” starts off with a ticking clock and then the alarm goes off with a nice little guitar melody that starts with Hannes having a sombering vocal sound. This is such a beautiful ballad that you almost forget that the lyrics are filled with sadness of losing a loved one. “Somebody To Hate” picks you back up with a rockin’ track that has a killer guitar solo. It also has some “Hey, Hey’s” that will have you chanting along. “She Came She Saw” has to be one of the catchiest songs on the album that will for sure have you stomping your feet and banging that steering wheel again. Steffen and Andi do a fantastic job on the rhythm, that it stays catchy throughout the whole song. “Highlight Zone” is a face paced high tempo rocker that shows the faster side of Kissin’ Dynamite. It also has a gun blazing guitar solo.

“Masterpiece” is another ballad. After all, every rock album needs to have at least a couple of ballads to please all listeners. It also shows the vocal talents of Hannes and guest vocalist Jennifer Haben from Beyond The Black. “Flying Colors” shows the amazing talents of Jim and Ande with a guitar show off intro. This is another catchy, chorus heavy song that will have you singing along in no time. “Under Friendly Fire” is another great song to make this one of the albums you want and will listen to from start to finish. Great riffs and beats that keep your attention and it is filled with yet again another blazing guitar solo. “Larger Than Life” is another catchy song that will have you banging your head with your metal horns up in the air. “Utopia” is the closing track that brings a little gloom to the album. I know I used this term in one of the last reviews I did, but this track could be classified as their “epic” song since it starts off really slow with a marching beat as Hannes sings his lines beautifully. Slowly by slowly, the song picks up pace before it becomes a full on rockin’ tune.

This album is a great addition to my collection. You might want to look at getting the extended edition as it has four additional songs and a DVD that is filled with live clips and a tour documentary. As it is in my collection, I feel you should do the same and add it to yours.