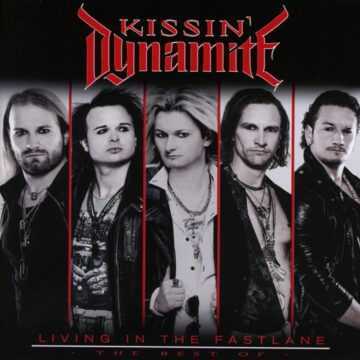 Review:
Two of the most frequent misconceptions that I read from Sleaze Roxx followers are: (1) there is no really good music getting released these days; and, (2) they do not know of any good music to listen to released in the last 20 or so years. There are many great bands in the last two decades that have released tons of really good songs and albums. One for which I admittedly came late to the party is Germany’s Kissin’ Dynamite. If you follow Sleaze Roxx closely, you’ll likely have noticed that Kissin’ Dynamite have been getting a lot more coverage on Sleaze Roxx in the last four years or so, and ever since I heard their phenomenal album Ecstasy. How good was Ecstasy? Well, if Sleaze Roxx could add one album to its Sleaze Roxx’s Top 12 Albums of The Decade (2010-2019), Kissin’ Dynamite‘s Ecstasy would have the #13 position. That is the one album that I couldn’t squeeze into the Sleaze Roxx’s Top 12 Albums of The Decade (2010-2019) and I still think to this day about whether I should have included that record rather than some of the later picks on that list.

That being said, Kissin’ Dynamite‘s great songs do not start with Ecstasy. The German rockers have been very consistent with a strong album virtually every two years since 2008 starting with Steel of Swabia (2008) followed by Addicted To Metal (2010), Money, Sex and Power (2012), Megalomania (2014), and Generation Goodbye (2016). This is actually the first time since Ecstasy that Kissin’ Dynamite will not have released a new studio album within the two-year mark but their next studio album Not The End of the Road will be available very soon via their new label Napalm Records on January 21, 2022. Prior to hooking up with Napalm Records, Kissin’ Dynamite were affiliated with AFM Records for a long time so the latter likely has apparently elected to release a greatest hits type compilation as its last hurrah with the band.

Although I have all of the Kissin’ Dynamite albums that are represented on Living In The Fastlane – Best Of, which includes the live album Generation Goodbye “Dynamite Nights” (2017), the compilation album is still well worth the money in my view. First of all, you really get most of the band’s greatest songs on one album and there are a bunch of bonus tracks including three (“All Are Equal”, “Going All In” and “In The Eye of The Shitstorm”) from Japanese editions of the group’s albums released from 2012 to 2016. There is also one previously unreleased track (“Living In The Fastlane”) from Kissin’ Dynamite‘s Generation Goodbye session. All four songs fit in quite well on Living In The Fastlane – Best Of, which makes you wonder why they weren’t included as “regular” tracks on Kissin’ Dynamite‘s albums in the past. To their credit, AFM Records also included four songs from Ecstasy even though that album was released via Metal Blade Records. The only albums that do not get any love are 2008’s Steel of Swabia and 2010’s Addicted to Metal although a few live tracks from Generation Goodbye “Dynamite Nights” kind of represent those albums with “Against The World” and the title track for Steel of Swabia and the very good “Love Me, Hate Me” and “Supersonic Killer” from Addicted To Metal.

Listening to Living In The Fastlane – Best Of, I really feel that Kissin’ Dynamite‘s best tracks match up nicely against any top songs from our favorite bands from the ’80s except that there isn’t that emotional attachment and familiarity (that someone who had grown up in the ’80s) compared to when someone is listening to tracks such as Mötley Crüe‘s “Looks That Kill” or Ratt‘s “Round And Round.” Kissin’ Dynamite‘s songs such as “I’ve Got The Fire” (from Ecstasy), “Hashtag Your Life” (from Generation Goodbye) and “Running Free” (from Megalomania) will have you singing along in no time. If you like ballads, Kissin’ Dynamite‘s Living In the Fastlane – Best Of also has you covered with “You’re Not Alone”, “If Clocks Were Running Backwards”, “Against The World” (live) and the absolutely superb “Heart of Stone.”

If you’re not familiar with Kissin’ Dynamite, I highly recommend picking up Living In The Fastlane – Best Of because it arguably has a collection of songs that can stand toe to toe with any band’s greatest hits in the last 15 years. All I know is that Living In the Fastlane – Best Of is still on regular rotation among the albums that I listen to the most in the last three months and that’s stating something considering the amount of records that keep making their way to the Sleaze Roxx headquarters.

Kissin’ Dynamite‘s “I Will Be King” video: