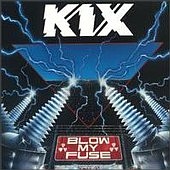 Review:
The fourth release from these Maryland rockers would prove to be some of their greatest and most successful work. With kick ass songs like “Red Lite, Green Lite, TNT”, “Cold Blood” and the twist on the childhood game “No Ring Around Rosie”, Kix deserved every break they got. But like so many bands in the late 80s, it would be a breakthrough power ballad that achieved the most acclaim. “Don’t Close Your Eyes” shot to #11 on the charts while dealing with the very sensitive subject of suicide – and delivered it’s point with precision, the song gave hope to those that needed support.

The sound on Blow My Fuse is no-frills rock, similar to Helix with AC/DC riffs. This band was very talented and I am happy that some of the members are still making music today. Blow My Fuse gets two thumbs up, and is one of the best of the hard rock genre!