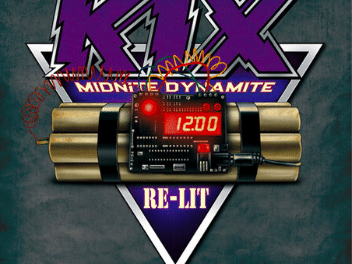 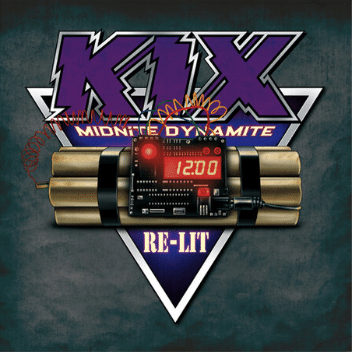 Review:
A few years ago, KIX released Fuse 30 Reblown, which was a remaster and remix of their biggest album, Blow My Fuse. A sample leaked online of the punched up sound and I ordered the big pack with the t-shirt and the works and that CD has not been too far from my CD player for the past two years. It took a fantastic album that had such great songs and only improved upon it by correcting the production errors.

In late 2020, KIX announced that their 1985 album Midnite Dynamite was getting the same treatment. So, I ordered it immediately because of the strength of Fuse 30 Reblown. And, what I received was about what I expected. It is what it says it is on the box. It is Midnite Dynamite Re-Lit with that classic album given the same improved techniques that Blow My Fuse received in its remixing. The question is, does Re-Lit improve the album? The answer is, yes. But, not as much as Fuse 30 Reblown improved Blow My Fuse. Here’s why.

Blow My Fuse had a lot of the same techniques on the original release that bands of the time used which involved a heavy echo effect on the vocalist and somehow a turned down sound. I don’t just mean volume but it almost feels like there is something holding the audio back from being as loud and proud as it could or should be. For example, Poison‘s Open Up And Say…Ahh! album has a lot of those effects on it though many of us forget that as the Poison remastered greatest hits collections, of which there are plenty, cleaned up some of those things. KIX didn’t get those multiple greatest hits collections remastered so if you wanted to hear a truly lit, pun intended, performance of the songs, you had to either see them live or get one of their live albums which came out over the past ten or so years. So, Fuse 30 Reblown brought the vocals up to the forefront with less echo techniques and pulled the guitar out of the background in places as well. It really took the best album KIX ever did and made it a better album by letting the raw rock of it shine through.

While Midnite Dynamite, the original release, is a great record and one of KIX‘s best, it does not have the same amount of great songs that really jump out. So, already Re-Lit had to overcome the fact that it was a remixing of an album with less great songs. And, if you strip it right down, Midnite Dynamite also sounded pretty good back in 1985 and wasn’t quite as overly produced to fit the rock radio sound of the time. So, there was less to punch up. But, it still does punch up quite a bit!

When I heard this was being done, the tracks I wanted to hear were “Cold Shower”, “Lie Like A Rug”, and “Midnite Dynamite.” Those were my favorite songs on the original album and if they could be cleaned up and have new life breathed into them, I was all for it. And, that is what I got. In the case of “Cold Shower”, it is less of a noticeable clean up though I will admit I notice more of the backing music than I did before. But, “Lie Like A Rug” is given a new life with this remixing as it really takes an already great song and brings that KIX energy up even more than the original release. As for the title track, it does much the same as “Lie Like A Rug” though, again, it isn’t as big of a leap sound wise as it felt on Fuse 30 Reblown.

One of the songs that really benefitted from the remixing was “Layin’ Rubber.” The song had a lot of youthful energy in its original release and that is amplified with the clearer vocals and crunchier guitars. Remember, it is the same recording just presented differently with different levels and techniques. But, this fast paced rocker is much better on Re-Lit than it was on the original release. I had that same feeling about “She Dropped Me The Bomb” on Fuse 30 Reblown. “Red Hot (Black And Blue)” feels like something that could have been on my least favorite KIX record Cool Kids. The remixed version on Re-Lit does improve the track a bit but it still feels like leftovers from another album. The album wraps with “Sex” and much like I’ve said about all the tracks, the Re-Lit version does sound better and is an improvement. What I can tell you about “Sex” is it brings more of the live KIX vibe to it.

Though I will confess I’ve only listened to it once through, there is a second disc in the collection in addition to the remixed album. It includes the demos of the songs on Midnite Dynamite in their infancy before they were altered, mastered, and became the songs we all know and love. A true KIX historian would love this. But, with my time due to being a dad and running a business, I have spent far longer on the finished, or perhaps re-finished, product.

Midnite Dynamite is number two or three on many KIX fans’ list of favorite albums. It deserved the remix and the remix does improve the listening experience from the old CD or, dare I suggest, cassette you have been listening to for years. But, I don’t think it quite reaches the same level as Fuse 30 Reblown as far as recapturing the magic of the original album. Perhaps that is because there was much more to improve mixing wise on Blow My Fuse or perhaps, as I’ve said a few times already, it is because Blow My Fuse simply had better overall content than Midnite Dynamite. But, overall, it is worth the $35 I paid to relive the songs with new life breathed into them with a new sound. I would buy another remix if KIX chose to do one but I think this album really wets the appetite for new music from KIX. Rock Your Face Off was great but it was also going on seven years ago now and I don’t think most heard that album and thought, “Yeah, these guys should be done now.” There is a lot of swagger, power, and sleaze left in this band. So, lets hear some new stuff!