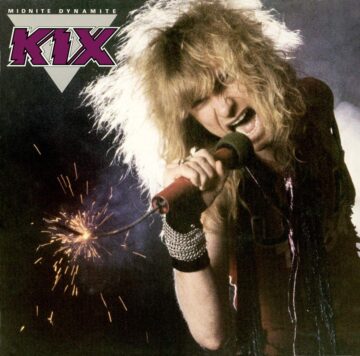 Review:
One of the first things my folks did to try and cheer me up after relocating to Marietta, Georgia in 1981 after three awesome years in Germany was take me out shopping for some new music. Yeah, I don’t recall if it was Cumberland Mall, Kmart or some area record store but what turned into hunting down KISS‘ latest release Music From the Elder resulted in me stumbling across what was soon to become one of my fave rock bands ever.

Back in the day, record buying happened everywhere from malls to department stores so for me that meant escaping the boring chore of staying at home with my parents to take off to grab some kind of frozen drink and browse through every single cool row of records and tapes I could manage to sneak in until it was time to rush off to a designated meeting place. Usually, that was wherever bread pretzels were sold! It’s a thing that for me was lost for a few years but that has been revived for about a half decade now. Yeah, it’s a common thing to hear my wife chuckle “Oh look, you found the records. See you later on today.” Well back in the fall of 1981 while nursing a depressed heart from moving away from a beloved neighborhood and good friends, I was in search of pain killers and anti-depressants in the form of some great new rock and roll to blast through my headphones and my flip was through the “K” section in search of a then new record by KISS that was supposed to be something way different than they had ever put out before.

Finding it pretty quick, I finished thumbing through the section coming across an album that at quick glance I though was a KISS bootleg but it turned out that the crazy looking bunch on the cover were in fact a band named KIX, not KISS, but the association was enough to quickly talk me into spending the extra change on it and that turned out to be, as they say, a deal and a half. Chock full of catchy, quirky, unusual rock and roll it was kind of like The Cars meets Cheap Trick with a dash of bar room swagger and going forward, every record the band put out was worth showing up to wait for the doors to open up at a record store to pick up fresh. Yeah, most rock and rollers point a finger at the bands’ more ’80s rock style breakthrough Blow My Fuse and follow up Hot Wire. I love those two big time, but I was already a full-blown KIX-aholic totally digging that 1981 debut, then being bowled over by sophomore release Cool Kids, before just totally being sticky sweet stuck with 1985 killer third full length Midnite Dynamite. That record bridges the gap between funny, quirky, dirty power pop KIX and the group’s full on Blow My Fuse hair metal.

Now I think what a lot of later fans might not dig about Midnite Dynamite are the chant tunes like “Cold Shower” and “Sex” that border on the edge of cheerleader cheesiness and I can understand that, but as a guy who grew up in the ’70s loving everything from KISS to the Bay City Rollers, I was caught again hook, line, and stinker. Even to this day, I’ll admit that neither are my fave KIX tunes on the record or heck, even on my top ten list of fave KIX songs but it doesn’t keep me from cranking ’em up in the car and pounding on the steering wheels while I sing along. It’s fun and at the end of the day, that’s mainly what KIX were, and are, about. I can still recall when the band put out Rock Your Face Off in 2014 and being excited to pass on the record to a friend and fellow KIX fan. I was shocked when the response was disappointment that despite being much older, KIX were still rocking out tunes about fast cars and loose women. Seriously? What did he expect? Songs about stretch marks and strollers? Sheesh. I immediately thanked the rock and roll gods that KIX were still throwing a party because if anything, I could still live vicariously through their music. But anyway…

Starting off with the AC/DC – like pounding title track, Midnite Dynamite is a flexible ten-tune ball of rock and roll energy that might not get the love 1985 hard rock classics like KISS‘ Asylum, Mötley Crüe‘s Theatre of Pain, Ratt‘s masterpiece Invasion of Your Privacy, or Twisted Sister‘s Come Out And Play get but within the grand story of ’80s metal, it stands up to, and in many cases above, a large portion of the hard rock records released that year. Some have been known to even argue that songs like the title track, “Bang Bang (Balls of Fire), and “Lie Like a Rug” deliver far more rocking than anything on AC/DC‘s 1985 release Fly On The Wall, while other tunes more than adequately fill spaces as good as other bands they come close to maybe sounding like… Only KIX had been doing it longer. “Red Hot (Black & Blue)” sounds like an anthem that oddly enough Portland rockers Black ‘N Blue might have aspired to an album or two down the road. “Layin’ Rubber” shoulda grabbed fans of Quiet Riot while “Scarlet Fever” mixes bits and pieces of classic rock that inspired bands like Ratt and Poison to sound like they do. Once again, funny thing is KIX had already been making that kind of racket for a while.

Along the way, KIX not only drop a style they had been cultivating since the late ’70s, they also lay down sounds clearly KIX-ish on catchy, sing-along rockers like “Cry Baby” and “Walkin’ Away”, a ballad that maybe only Cheap Trick could have pulled off if KIX hadn’t been around to deliver it. At the end of the day, it just amounts to KIX getting nowhere near the credit they deserve for the great rock and roll albums and consistently solid shows they have pitched out since day one. Even now, you can catch a very recent live clip of the band on YouTube and make a case for them being able to blow most of their peers off the stage all these years later. For those who disagree, let’s see if we can add ’em to the Mötley / Poison / Def Leppard tour when it ramps back up and see who can even keep up with Steve Whiteman‘s on-stage energy and vocal performance. Not a knock to those great bands we all love, just some much needed and deserved love for KIX.

Again I know most ’80s hard rock fans will point to KIX‘s two most successful albums which followed 1985’s Midnite Dynamite and that’s understandable. Unless you picked up your music somewhere other than the radio and MTV that decade, you would have missed KIX up until Blow My Fuse came out and if your rock and roll palate doesn’t stray far from hair metal, you probably just didn’t get what the band were doing before 1988 and honestly, sticklers more than likely never will. But let me offer a bit of advice, if you did miss it the first time around, give yourself a chance, open your ears and your mind, and check out Midnite Dynamite for a chance to hear something unique to what else was going on in hair metal in 1985. Yeah, you’ll hear some familiar things. After all, it’s still only rock and roll, but you’ll also hear some tunes that helped a lot of in the know rock fans in the ’80s get their KIX.