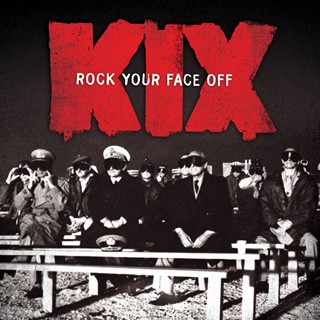 Review:
It was early 1989 when I saw a video on TV for a song called “Cold Blood”. At the time I didn’t know anything about the track or the long-haired outlaws that went by the name of Kix, but I was determined to find out more. Before long Blow My Fuse was pounding through the speakers of every party us teenagers threw, and despite my alcohol induced haze I’m positive that album was playing when I lost my virginity outdoors. Those were the days, and Kix remained a party staple right until their mid-’90s disappearance — so to say I was looking forward to the return of Kix after almost two decades away would be a major understatement.

Topping Blow My Fuse or Hot Wire would be practically impossible, simply because those albums are timeless classics that conjure up so many fond memories for aging rockers such as myself. Compounded with the fact primary songwriter Donnie Purnell is missing from the equation, the Baltimore natives surely had their work cut out for them — but rest assured, Rock Your Face Off is a Kix album through and through. While not as adrenaline packed as their most commercially successful releases, this new platter falls somewhere between Cool Kids and Midnight Dynamite — minus any of the new wave influences that may have seeped onto the former.

Having said that, mellowing out is not in Kix‘ vocabulary as they storm through tracks like “Wheels In Motion”, “Mean Miss Adventure”, “Rock & Roll Showdown” and the simply incredible “Love Me With Your Top Down”. Steve Whiteman, arguably one of the most underrated frontmen in hard rock history, sounds as if time has stood still and when he is backed with the twin guitar attack of Ronnie Younkins and Brian Forsythe magic happens. Even songs that don’t possess the typical Kix intensity, such as “Rollin’ In Honey” and “Rock Your Face Off”, settle into a thumping rhythm that sucks the listener in — and if you don’t find yourself singing along to “All The Right Things” there is something wrong. As expected Kix threw in a ballad, seeing as it was “Don’t Close Your Eyes” that practically launched their career, but “Inside Outside Inn” misses the mark.

While several groups of the era hid their musical imperfections behind sky-high hair and layers of cosmetics, Kix were jesters for the working man — and that attitude continues to permeate throughout Rock Your Face Off. The lyrical content hasn’t changed much since the band’s glory days either, as the sexual innuendos and party atmosphere continue to be the driving force. I’d be a liar if I said Rock Your Face Off was Kix‘ best work, because it isn’t and realistically never had the chance to be — but it has lived up to my lofty expectations, and that really is a testament to how good this return album is. After twenty years, Kix continue to be one of the most satisfying bands in the entire hard rock genre — and I hope to hell this is only the beginning of their resurrection.