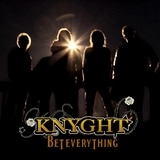 Review:
Knyght list a lot of great 80s bands as influences so it was with some optimism that I put on this young Italian band’s EP, Bet Everything. And with the catchy sounding start to the opening of “Goin Anywhere” it seemed I was in luck, but that was before the singer started, well, ‘singing’. I get the impression lead vocalist Tommy is trying to imitate Poison‘s Bret Michaels‘ delivery, but it doesn’t work because he just ends up coming across like he has sucked up a huge amount of helium gas instead. The backing vocals, although a bit weak, are actually better on this than the lead vocals.

After this tune I’m not seeing Knyght ‘Goin Anywhere’ fast, but maybe things will start looking up. Unfortunately things don’t improve much as “Heaven Or Hell” dully drags on forever. The keyboard laden ballad “A Million Times” isn’t a bad song in itself – probably the best track – with some potential, but again it’s the vocals that let it down for me and a lot of the lyrics get lost in the strong accent in the singing. “Shut Up” is, quite frankly, annoying, and on this one I’m wishing they would in fact follow the instructions on the song title and shut up!

Musically these songs are poppy melodic rock but I’m grasping at straws to find something I like on Bet Everything. As a band they seem to be able to play adequately enough but it still sounds very amateurish.

It is great to see young guys giving it a go, and with lots of eyeliner and pretty-boy looks, Knyght no doubt have attracted a bit of a fan base amongst the local teenage girls. There is a feeling of cheerful exuberance here, but this is one bunch of dudes who definitely should not give up their day jobs. Knyght are no Black Tide that’s for sure. Maybe with a bit more experience they will get better.