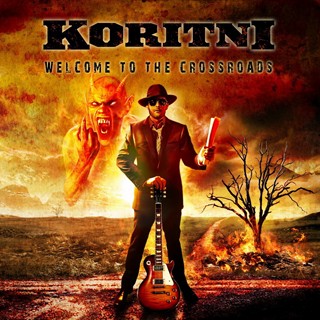 Review:
While Australian hard rock begins and ends with AC/DC and Airbourne (in a commercial sense), fellow country-mates Koritni have quietly been slugging it out since 2006 with little fanfare. The lack of recognition being given to Koritni simply confirms my suspicions that it takes more than raw talent to make it in the music business.

From the opening slide guitar licks of “Down At The Crossroads” I knew I was in for a hell of a ride — with the help of Jeff Scott Soto the song is a bluesy cut that tells the story of someone selling their soul to the devil and slowly builds speed until erupting during the chorus. The following track, “Better Off Dead”, is an full-throttle look at social media, proclaiming “Just grab some random photos, make up a name/And you’re ready to pass judgment on people/And anonymously fuck with their lives”. I’m not a huge ballad fan, but “Lost For Words” works in the same way Tyketto‘s “Seasons” does, bridging the gap between mellow and mid-tempo. The excellently titled “Money Talks, It Says Goodbye” (how true is that?) is a straight-forward rocker that contains some of the album’s best guitar work, while “Take It Like A Man” closes the disc with a standard lesson in hard rock.

For me the stand out track on Welcome To The Crossroads is “Sydney In The Summertime”, a catchy as hell stomper that pays homage to the band’s hometown. With a mix provided by famed knob-twister Mike Fraser (Guns N’ Roses) the song contains a huge and infectious chorus. Too bad it didn’t come out a decade earlier, as it could have been the theme song for the 2000 Sydney hosted Summer Olympics — if this number couldn’t get an athlete’s adrenaline pumping nothing would.

With an equal mix of AC/DC and The Answer, Koritni have once again proved to be one of the most consistent and entertaining groups in the current hard rock scene — and it’s about time the rest of the world woke up and gave these Aussies a little respect. You’ll be hard pressed to find a more satisfying release this year than Welcome To The Crossroads, as Koritni have once again hit a homerun — or in rugby terms, a try.