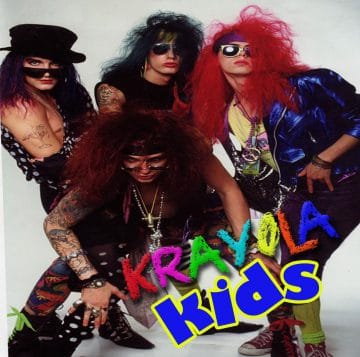 Review:
The world needs the Krayola Kids right now, badly, in so many ways. We need a band that puts the fun in music, with the sing along choruses, and the sound and words that stick in your mind long after you press stop. With today’s political climate and world views, we need a song like opening number “Krayola Rock N’ Roll” to play loudly and just boost our spirits, to jump up of our couches (office cubicles or whatever) and get up and sing to. Yes, the song is that damn catchy and fun. This is prime sunset strip glam but not one dimensionally so.

Upon first view of the band, you will see the brightly colored hair and the multi-colored clothes and just pass them off as just another hair metal band with no substance, but you need to look beyond the rainbow colored hair and clothes, to see the pot of gold at the end. The band is not all glammy bubblegum pop. Yes, some songs are born and bred sunset strip anthems, but the band offers a bit more variation to the mix.

Being at its core, the longest running members, vocalist Krayola Kelly and guitarist Pepsi Pop went about to create their own musical vision after their split from The Babydolls. “Sky Blue” is a typical ballad of sorts but has a slight Enuff Z’Nuff feel to it — primarily the “New Thing” era from the group’s self-titled album.  I say this also because at times overall, the guitar playing of Pepsi Pop, gives me thoughts of Derek Frigo of the early Enuff days. Listening to “Sweet Pea” which has that darker, glam, goth vibe, gives hints of the boys’ previous band The Babydolls. You can get a sense of the wide amalgamation of sounds that Krayola Kelly plays and puts forth in the band’s sound as a whole and for this CD release. So much like the colorful look the boys have, the music reflects that. So you get shades of Queeny Blast Pop, a tad of Cheap Trick, some Alice Cooper,  and Bolan maybe but it all makes it interesting in the end.

The 12 songs all offer a look into the band and the colorful tales of when glam was in its heyday with one live song, the aforementioned ballads, some of a different mood and some songs of decadence. Each offer that to the listener. Production has held up well with minor fluctuations in sound and all instruments coming through nicely.

For those that know, the band has ties to many notable bands of the scene back in the day — The Babydolls, who morphed to Astro Vamps, the Zeroes, Poison (indirectly) and Cartoon Boyfriend. With this limited release from FnA Records, it offers a glimpse to those days and those sounds of glam rock in its prime. What they were, what they became and yes, maybe what could have been, should the winds of change blown a bit differently. Take a listen, and put that smile on your face again.

Reviewed by Will “Bones” Lee for Sleaze Roxx, August 2017