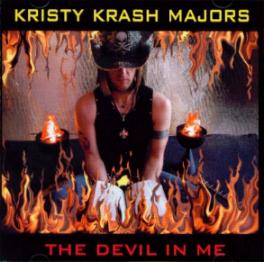 KRISTY KRASH MAJORS
THE DEVIL IN ME
Released 2002 (Perris)

Review:
With his first solo outing, former Pretty Boy Floyd guitarist Kristy Krash Majors proves to be a one-man band. “Devil In Me”, “Over The Edge” and “Rock City On The Radio” show off Major‘s blend of punk/metal. There is also a cover of Lita Ford‘s hit single “Kiss Me Deadly”.

The Devil In Me has the sound and feel of a Pretty Boy Floyd album, which isn’t surprising considering it was originally written to be a PBF release. I feel that The Devil In Me shows Kristy Krash Majors‘ creative side quite well and deserves two thumbs up!