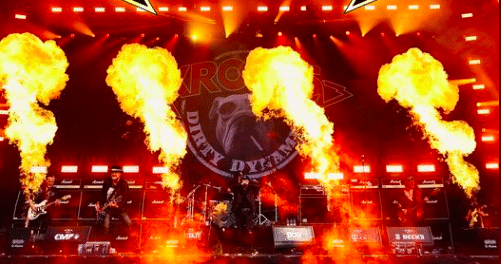 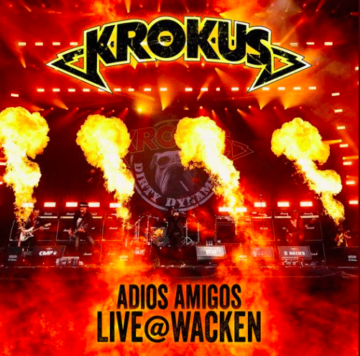 Review:
Well there seems to be a light at the end of the tunnel here in 2021 as we’re seeing more and more states bucking up the mandate that saw us willingly forgo our freedoms in favour of fear. As we see some states with fans in the stands at baseball games and concert tours start to pad out to include open places on the map, I still can tell you that I, in an open state, still have not attended a concert since August 2019 in person. No, I’m not afraid of the virus. Hey, if masks work… Right? But, no one has come to town that I would go see. And, drive in concerts sound a little absurd. I am just that little bit too young to have gone to drive in movies and based on all the stories I hear, they’re more for making out with who you go with than watching the movie. I’m pushing 40. I’ve been married for 14 years. Making out doesn’t happen anymore! So, that is a hard pass on the drive in concert option. So, what do I do to get my fix of rock and roll? Livestreams with no one in the crowd is one way. But, they fall somewhat flat. But, new live CD/DVDs that were recorded just before the world stopped turning? That fits the bill!

I recently reviewed Great White‘s Live CD/DVD and that was an enjoyable break from the skull crushing status quo. But, Krokus! That is an interesting one for me. I’ve always sang along to Krokus songs on the radio. I’ve always seen their videos on MTV Classic, formerly VH1 Classic. But, I don’t think I ever actually bought one of their albums. So, believe it or not, this one, presumably their final one, is my first Krokus album. It is called Adios Amigos Live @ Wacken, which speaks to them calling it a career as so many of our heroes began embarking on farewell tours just before this pandemic began. KISS, Elton John, Ozzy Osbourne…. Krokus were on that list as well with a North American tour planned. I’m told that tour will actually happen when the world is turning again. But, who would have believed we would be a year plus into this thing. I’ve gotten a little opinionated about the world in which we live. Let’s stop the divisive views and all agree on one thing… Krokus are a great band!

The CD has great sound but does sound like it was recorded in a club. Just the way it is recorded and sounds almost feels like an enclosed environment with only a certain number of live fans. The DVD paints a way different picture as you can see the massive crowd all into the show. The set does take place during daylight which is disappointing. To me, that shows other acts headlined and this was not the “main event.” You almost wish that for a farewell performance, it would have been higher up the bill. Marc Storace sounds great. He looks like my uncle George who is my mother’s older brother. But, he is also almost 70 years young. So, I think we can cut him some slack for not looking as spry as the guy from the “Midnite Maniac” video. His voice is as strong as ever. And, his command of the stage, though not full of jumping or even dancing, is a sign of a veteran performer who learned his shit well. Sincerely, he really sounds great.

The set list was a little surprising. There are a number of covers and some not ones I’d associate with Krokus. Sure, they had a lot of hits with covers. But, I’m not talking about “Ballroom Blitz” which isn’t performed here. I mean songs like Neil Young‘s “Free World” and “Quinn The Eskimo” by Manfred Mann. But, there are the tried and true covers like “American Woman.” What isn’t on here, though, are songs like “Midnite Maniac”, “Screaming In The Night” and “Ballroom Blitz.” In the US, I would argue these were the three most played songs on the radio for these guys with “Ballroom Blitz”, a Sweet cover, probably being the most played on my local rock stations. But, I won’t dwell on the bad. Let’s dwell on the good. The performance was really strong and all the musicianship was great. I think like my father’s Doo Wop groups when I was growing up, you can somewhat tell who is a replacement piece in the group by their age. But, all played incredibly well and really put forth a performance worthy of a band half their age. My favorite two tracks on here are “Eat The Rich” and “Easy Rocker.” There are also goodies like “Bedside Radio.” But, the guitar work on “Easy Rocker” and the chanting sing along are infectious.

I read somewhere that Marc Storace was on the short list to replace Bon Scott in AC/DC when Bon died. When I read it, I thought, “Nah, that would never have worked.” After seeing this disc, I think it would have been even a better fit than Brian Johnson was. I don’t want to get into a Back To The Future space and time continuum debate here. Had Marc sang for the mighty AC/DC after Bon Scott‘s death, we might not have gotten the classic content as it was from AC/DC, which might not have inspired some of our favorite bands and the overall impact on the globe, not just the music business, would be huge. But, on the surface, Marc‘s voice is very much in line with Bon Scott. And, his stage performance is as well. I’m just saying… Hell, it could have worked! And, when Brian Johnson had to step away, maybe Marc should have been called up to fill in instead of Axl Rose. I’m just saying.

I remember once having my brother in law insist that 1992’s AC/DC double live album was all the AC/DC you needed. I disagreed then and I disagree now. I have every album of theirs. Krokus‘ Adios Amigos Live @ Wacken is currently the only Krokus album I have. But, I will buy some of the old albums based on the strength of this one. No, it isn’t the only Krokus album you need. But, it is a good album. And, while it misses the mark in song selection somewhat, it does deliver one heck of a good time with the songs that were selected.