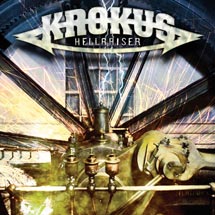 Review:
For a band that has been ridiculed endlessly over the years, Krokus has sure put out their fair share of killer albums, and Hellraiser is the latest. I’m sure Krokus has released a few stinkers over the years, but I’ve enjoyed every album of theirs I ever owned (including Change Of Address) and this one is no exception. Bands members may (and have) come and go but the musical foundation that was laid years ago remains as sturdy as ever.

You’d think that after 30 plus years and around 15 albums that Krokus‘ well would eventually run dry…well think again. I don’t give a shit how many people compare vocalist Marc Storace to Bon Scott, or how many laughed at his absurd 80s afro, there is no denying the man can sing. And not only sing, but as one of the principle song writers on Hellraiser the man has a gift for penning memorable hard rock songs.

Among those memorable songs are the full-throttle title track, “Too Wired To Sleep”, “Fight On”, and the hard rocking “Turnin’ Inside Out”. Even better yet are songs like “So Long” and the incredible “Angel Of My Dreams” in which the band slows things down for some passionate and moody music that borders on balladry – and this is coming from someone that usually hates the ballads. Some of the last tracks lose focus somewhat, but even those can’t be considered horrible by any means. Storace sounds as good today as he did in the mid 80s and Mandy Meyer will make hard-core Krokus fans forget that Fernando Von Arb is no longer around.

Hellraiser is a great album and is exactly what one would expect from Krokus. They deliver a hard rock album that stays true to their roots and offers up enough time changes to make everything sound fresh. I doubt this CD finally gives the band the respect they deserve, so they will simply continue to deliver great music to people that can look past those old videos and publicity photos.