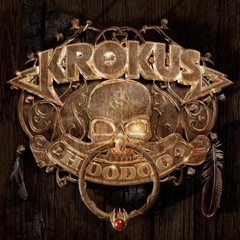 Review:
Few hard rock bands have garnered as much scorn as Krokus. I’m not sure if the ridicule had to do with the group’s AC/DC derivative sound, their outrageous wardrobe and hairstyles, their inclination to release cover songs or the fact they originate from Switzerland. Whatever the reason, most of the bad press Krokus has amassed over their long and storied career has been unwarranted, because the music itself is usually very entertaining. Hoodoo is no exception, following right where 2006’s satisfying Hellraiser left off.

With the classic One Vice At A Time line-up intact for the first time since 1982 these seasoned veterans sound completely re-energized. There isn’t rocket science involved when it comes to a Krokus album, just no-frills hard rock played with passion and honesty. Both of those qualities are found on Hoodoo, which is a fun album, nothing more and nothing less. Elements of the band’s past surface occasionally, such as the need for a cover song — this time an excellent rendition of Steppenwolf‘s “Born To be Wild”. Sure this song has been done to death, but Krokus do it as well as anyone.

Comparing Hoodoo to One Vice At A Time isn’t that much of a stretch as Krokus seems to have recaptured the energy they displayed all those years ago. There is no denying that the band has matured, but that doesn’t mean they have mellowed with age. Far from it, as “Drive It In” kicks off the disc with a chugging rhythm before the first single “Hoodoo Woman” infuses some slight blues rock to the proceedings. The fun doesn’t end there, as the grizzled rockers rev things up on “In My Blood”, “Keep Me Rolling”, “Shot Of Love” and super-charged closer “Firestar”. You have to love an album that ends on such a high note.

There was only one song on the entire CD that left me cold, that being “Rock’N’Roll Handshake”. Musically the song is fine, but lyrically it is the type of song that gives the Krokus bashers more ammo. Perhaps the rock’n’roll handshake was to be the band’s version of the metal horns, but it really doesn’t pack the same punch does it?

There are plenty of people out there who will write Hoodoo off for the simple fact that it was released by Krokus, but my advice is to completely ignore them. Krokus has recorded a stellar album here, a CD that is every bit as good as Hellraiser, and then some! The band members are sporting quite a few more gray hairs these days, but the attitude, drive and musicianship screams 1980.