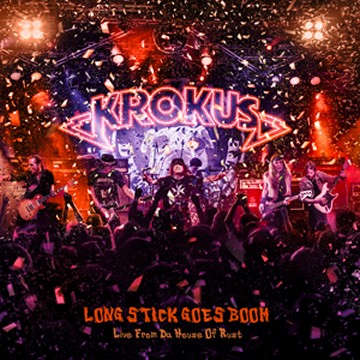 Review:
Krokus has been around for almost 40 years but my familiarity with the band has always been pretty poor. For reasons that do not come to mind, I have known for a long time that the two Krokus songs I know best — “Midnite Maniac” and a cover of The Sweet‘s “Ballroom Blitz” — courtesy of the ’80s video era, are not representative of the Swiss group’s actual output. Rather I have mostly thought of Krokus, to a large extent, as one of many AC/DC clone bands.

Although I noticed that Krokus‘ new live album Long Stick Goes Boom: Live From Da House Of Rust did not have the two tracks I was most familiar with, I elected to purchase the disc in the hope that it would turn me on to a band that I had largely bypassed over the years. That strategy had recently worked for me with Kix when I purchased their Live In Baltimore collection despite not really knowing or remembering any of their songs. Unfortunately, that same strategy has not paid off for Krokus, as I find this live record could easily be called ‘Long Stick Goes Pfffft’.

It’s not that Long Stick Goes Boom: Live From Da House Of Rust does not have a lot of energy, or capture the live feel of the show in question, but I find myself a little bored when listening to many of the songs. Having to listen to a cover of The Guess Who‘s “American Woman” when the band has more than 15 studio albums under their belt is somewhat puzzling. As anticipated, Krokus does sound like a cheap imitation of AC/DC on a number of songs including “Long Stick”, “Hallelujah Rock ‘N’ Roll” and “Rock City”. That is certainly not a bad thing, as there are many AC/DC clones out there these days, but I was secretly hoping for more from Krokus. Then during “Tokio Nights” the band sounds like the Scorpions, and I really starting to wonder if Krokus have any real identity of their own!

While doing this review, and researching the band a little bit, I think I might have figured out why two of Krokus‘ most recognizable songs — “Midnite Maniac” and “Ballroom Blitz”, from 1984’s The Blitz — did not make it onto Long Stick Goes Boom. Band founder and bassist Chris Von Rohr was fired from the band just prior to that album so he is probably not keen to play songs from that era. Assuming you count the medley of “Rock City/Betta Than Sex/Dog Song” as three songs, half of the compositions on Long Stick Goes Boom come from 1980’s Metal Rendez-vous and 2013’s Dirty Dynamite. If you were hoping for a sampling of what Krokus has to offer over their long career with this live album you will be disappointed, as ten of the band’s studio albums aren’t represented and many of their more popular singles are omitted.

Krokus‘ Long Stick Goes Boom: Live From Da House Of Rust is an “alright” live album that I do not regret purchasing, but it doesn’t incite me to want to discover anything more from the band’s discography.