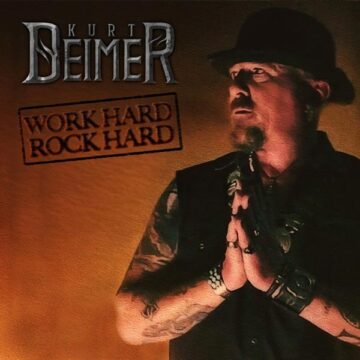 Review:
Not content with producing several Hollywood TV movies and being soundly dispatched by Michael Myers in the 2018 reboot of Halloween, Cincinatti native Kurt Deimer turns his hand to the rock ‘n’ roll genre with his first collection of songs, aided and abetted by current Bon Jovi guitarist Phil X and high profile producer Chris Lord-Alge.

“Naïve” kicks off proceedings and has a real Kid Rock southern rap feel to it with Deimer’s narrative style perfectly suited to a real grower of a track. This style slightly changes with “Burn Together” that features a cameo from Queensrÿche’s Geoff Tate on a song that really did nothing for me personally but would seem right at home on a soundtrack to one of the horror franchise films that Deimer is proposing to release in the near future. “Only Time Will Tell”  goes back to the Southern storytelling rap drawl over an insistent chorus that, to be completely honest, appears to be trying way too hard to be memorable and falls a little short to these ears.

The same cannot be said about “Ease It In” which is indeed noteworthy and wouldn’t be out of place in a set list of guitarist Phil X’s former band Daughtry as well as his current, more famous one. It also lessens the storytelling delivery in favour of more actual singing and is all the better for it. “Watcha Sayin” reverts back to the former narrative which is by now becoming a little tiresome, almost indistinguishable from one another and would be were it not for the harmonious chorus on both this and EP closer “Back of The School.”

The EP is cleanly produced which is nothing less than you expect from a man of Chris Lord-Alge’s calibre, who has produced everyone from The Rolling Stones to Green Day, and Phil X’s guitar is faultless throughout. The problem being, as I hinted at earlier, is in Deimer’s delivery which is more Richard Burton than Uncle Kracker and lessens the potential impact of the songs after the storming opener.

Deimer and his band are heading out on tour as support to Yngwie Malmsteen so quite what that audience will make of this is anyone’s guess, as this is odd, eclectic and never less than interesting, but a little more variation in the actual telling of the various stories would have raised the enjoyment bar much  higher.