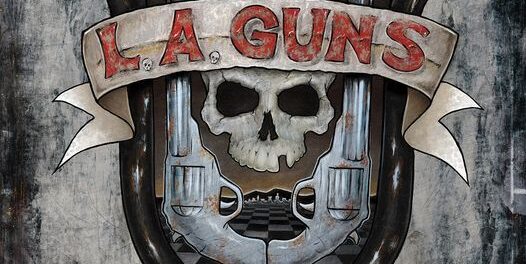 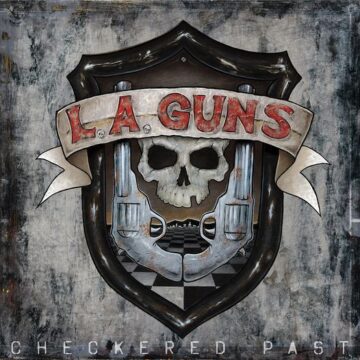 Review:
L.A. Guns are one of my favorite bands. But, I can be honest about the things I love. For example, I am a life-long Hulkamaniac and yet I can tell you that the worst high profile match in pro wrestling history was “Hollywood” Hulk Hogan versus the Ultimate Warrior at WCW Halloween Havoc in 1998. Why? All of the magic was gone from these two who created magical moments only eight years prior at WrestleMania 6. They didn’t even have candy corns that could make reindeer fly like the Winter Warlock in Santa Claus is Coming to Town. But, let’s put one foot in front of the other and soon we’ll be talking about the subject at hand — L.A. Guns‘ new album Checkered Past.

Checkered Past is a departure from a very Hogan/Warrior Havoc match like last effort by L.A. Guns‘ The Devil You Know. For me, that is among the worst things this band ever put forth. I never wanted to hear an album where L.A. Guns did their best Black Sabbath impression with the worst production the band has ever had. But, that’s what we got there and it was the worst thing they had done since American Hardcore in 1995 which was an abomination. Checkered Past, while still suffering from lackluster production, returns the band back to melodic hard rock with a fist full of attitude. And, it delivers in so many ways that The Devil You Know doesn’t.

The first track on the album is “Cannonball” and it features a very “No Mercy” like guitar riff that sets the tone for the album. Though the verse does make me think of Tina Turner’s “Proud Mary” a little bit, the lyrics are bad ass and this song really kicks ass even through muddy production. Seriously, was Michael Grant responsible for cleaning off the sound on The Missing Peace? Because, that album sounded clean and perfect and this and the last L.A. Guns album sound like it was recorded in a swamp by the Duck Dynasty cast. Can we get Chris Laney involved to do the next album, should there be one?

“Bad Luck Charm” has a little bit of that “Sleazy Come, Sleazy Go” style from Cocked And Loaded…. Maybe “Hollywood & Vine” from Hollywood Forever? Very bluesy, groovy rocker. “Living Right Now” is next and it has an almost punky sound which fits so well here. This might be my favorite track on the album. Phil Lewis isn’t singing particularly high here and almost sounds reserved. But, this really has a great vibe and energy. “Get Along” is the softer “ballad” type song on the album which they did a video for. It has a little bit of that “It’s Over Now” from Hollywood Vampires. Phil, at his age, has the best preserved voice of the veteran L..A bands. I don’t think many could truly argue that fact.

“If It’s Over Now”, not to be confused with “It’s Over Now” as previously mentioned, is next. This one has a modern vibe and that isn’t a compliment. It is catchy. But, there is production put forth on this track that makes it sound more in tune with late ’90s hard rock and that just isn’t in my wheelhouse. “Better Than You” has a bad ass guitar riff that drives the song. Once again, perhaps for the second or third time on this album, Phil sings in a much lower register which is much more of a spoken word style rather than his typical scream. His accent comes out as a result. It also has a more ’90s vibe but maintains more of an attitude.

Any dude who ever had an argument with his significant other can relate to the song “Knock Me Down.” This is amongst my favorites on the album as it is full of energy. Great hooks here. The drumming almost gives it a Rolling Stones on speed vibe. “Dog” sounds like something that might have been on The Devil You Know mixed with a little bit of Vicious Circle‘s thrash influence. Phil lets his vocals rip a bit here and it was needed as he was tame a little bit on prior tracks. His scream going into the epic guitar solo with a cool echo effect really makes this a memorable track I’d love to hear live. “Let You Down” is one of the best written songs on the whole album and is a much slower song. I’m not sure what to compare it to from their catalog. It could possibly have fit in somewhere on The Missing Peace. And, that is high praise.

“That Ain’t Why” has an almost Deep Purple vibe going with L.A. Guns doing what they do. If I didn’t know L.A. Guns had a new album out and was asked to say what album this came from, I’d have to say 2001’s Man In The Moon, which was a criminally underrated album. So, this is another track I find I really love. “Physical Itch” is a track that probably was written for The Devil You Know. And, it wouldn’t have improved my negative view of that album. It sends the album off with a little bit of a popcorn fart.

With the recent interviews done by Phil and a light tour schedule even as the world starts to reopen after the pandemic, I fear the future of L.A. Guns isn’t as bright as I’d like to see it be. Phil has been critical of things more openly than he probably should be. And, the band having to use Adam Hamilton as a drummer is a sign of weakness. Don’t get me wrong. I love Hamilton and am delighted he’s back in the band. In fact, I got to sit and chat with him after a 2004 concert and was glad there is a single rockstar I’m taller than other than Ronnie James Dio. But, I do think there is a clear rift happening in the L.A. Guns camp which is not good given their extensive history of band troubles. In fact, you would have wished this would not be the case right now after Tracii and Phil won the legal battle against Steve Riley. But, I could be reading the signs wrong and maybe the reason Phil is doing all the media and the rest are not so much is because the rest of the band are mall hopping with Tiffany. Who can say?

Regardless, Checkered Past was an album I was concerned about playing because I had so much love for The Missing Peace and so little love for The Devil You Know. This is a return to form with the charm that made all of us L.A. Guns fans in the first place. There are some stinkers. There are very big production issues that should not exist in the 21st century. If demos by bands and “artists” that throw headsets on you as you go to the shitter on Hollywood Blvd can sound like big dollar productions and they were likely recorded onto a laptop, a national band with a good label like Frontiers should have bad ass production qualities and not muddy sound that detracts from the finished product. But, it is very much an L.A. Guns album which means you’ve got songs that you can pump your fist to, songs that you can relate to on a personal level, and maybe a song or two that just takes a wild swing and a miss. Nevertheless, the Hollywood Vampires, the Electric Gypsies themselves are back in great writing form here and delivered an album that redeemed themselves.