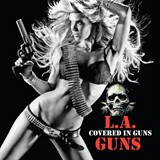 Review:
This is bad…very, very, very bad. As if warring factions resulting in two bands using the L.A. Guns moniker isn’t enough, Covered In Guns just drags the once highly regarded name deeper into the mud. Unlike 2004’s Rip The Covers Off in which the band put their own stamp on the covers, this new CD offers absolutely nothing to a handful of radio staples.

Covers albums are usually hit and miss to begin with, but when you don’t add anything different to the original recordings what is the point? Listening to Covered In Guns is not only painful but halfway through I got so pissed off I wanted to reach through the stereo, grab the guitar, and club each band member over the head while screaming, ‘WTF where you thinking???’ That’s how bad this CD is… it’s not only a joke, but a complete slap in the face of fans who have loyally followed L.A. Guns through the years.

Is there anyone in the entire world that was salivating at the thought of L.A. Guns resurrecting April Wine, or worse yet Matthew Wilder? I doubt it. Choosing a bunch of songs that you can hear on the radio daily makes this a completely useless release, even more so when you figure that L.A. Guns adds absolutely nothing to them. Buckcherry‘s “Crazy Bitch” was released just over three years ago! Who in their right mind would decide we need another version of it already?

Another problem with Covered In Guns is the song selection. By bouncing from rock to grunge to pop it flows like a creek blocked off by a beaver dam. And to throw salt in the wound L.A. Guns end this abortion with a Christmas song! That’s right, a CD released in February ends on a festive note for those of you looking to get a jump on your holiday shopping… what a joke.

Covered In Guns is absolute shit and without a doubt the low point in L.A. Guns‘ long and storied career. It makes me sick that I actually wasted money purchasing this crap while everyone else involved, from the band themselves right down to the record label, should be embarrassed and ashamed. The only pleasure I’m going to get out of this album is taking it out of the CD player and snapping it in half!