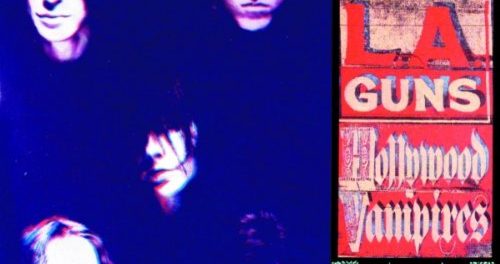 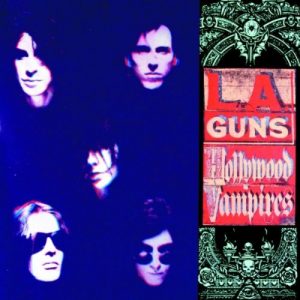 Review:
Hollywood Vampires is the third release from iconic sleaze rockers L.A. Guns.  It follows their two most influential albums, 1988’s self-titled release, and 1989’s Cocked And Loaded.  Each album had middling success on the charts and sales wise, peaking at #50 and #38 respectively on the Billboard Hot 200 charts. Hollywood Vampires maxed out at #42 on the same chart in 1991. According to the mostly reliable Wikipedia, the singles “Kiss My Love Goodbye” and “It’s Over Now” would peak at number 16 and 25 respectively on the Mainstream Rock Chart, while “It’s Over Now” maxed out at number 62 on the Billboard Hot 100.

Right from the opening song “Over The Edge”, you knew this would be a different L.A. Guns. Buddhist gongs and Asian laments set the tone for something completely different from Cocked And Loaded. Hollywood Vampires is mellower, and in my opinion, way over produced for the band’s style and legacy. One may call it a “maturing of sound” but I cry shenanigans to that. The time was mid ’91 and the record companies surely saw grunge on its way. Bands like Skid Row with Slave to the Grind and Van Halen with For Unlawful Carnal Knowledge were exploring a harder sound, but for some reason L.A. Guns chose a different route.

Sure, there are still some interesting tracks. “Some Lie For Love” and “Kiss My Love Goodbye” revert to songs that could have worked on Cocked And Loaded. “Here It Comes” stands out in its own right as a sleaze throwback, as does “Wild Obsession.”  But I find other tracks like “Dirty Love” or “My Koo Ka Choo” to be too forced and lacking in what I consider to be organic writing.

And frankly, there are too many ballads or ballad-like songs for me to appreciate a good long listen of Hollywood Vampires without skipping all over the place. Let’s face it. “The Ballad Of Jayne” was a masterpiece and L.A. Guns have tried to recreate it several ways without success. “I Found You” is a plodding bore. “Crystal Eyes” has some emotion to it, which I can appreciate, but still comes across as your average power ballad. “It’s Over Now” is acceptable. I don’t mind that one so much. It’s just kind of “there”, neither a ballad, nor sleaze-worthy.

Ultimately, I look back on Hollywood Vampires with melancholy. It wasn’t what the previous two L.A. Guns offerings were anything close to. I’ve listened to this album repeatedly over the past week, and find myself longing for some “Sex Action” or “Rip N Tear.”  And, after sampling 1994’s Vicious Circle and other latter day recordings, it sure seems to me that Hollywood Vampires was a misplaced anomaly.