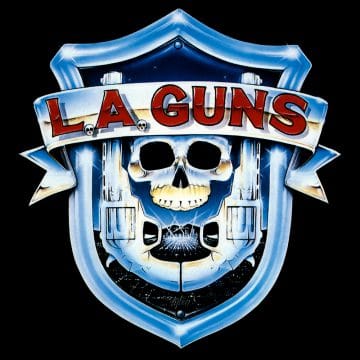 Review:
It had been quite some time since I had last listened to L.A. Guns‘ debut album. As I was popping the CD into my player, I started to recollect the release of the album and how I went about obtaining its contents. At the time of release, I was 13 years old, in grade 8 at Southwood Park Public School in Ajax, Ontario, Canada. Grade 8 would be the only year I would spend at this school. In the fall of 1988, I would be starting high school. Where that occurred is a story for another time. In early 1987, my parents had thought it was a good idea for me to switch schools, although we did not move, due to my distractions within my previous place of education, my parents thought it seemed logical that I move elsewhere to continue my education. I have to be honest; I was not every parents’ dream child. My school years were filled with fights that led too many suspensions. My grades were decent, but not great. The obvious conclusion from my teachers always was that “He’s smart, but does not apply himself.” I was a constant distraction to other students, cracking jokes and just being a major pain in the butt to my teachers. I attribute this to really not giving a shit and discovering my real passion in life — hard rock music.

As much as I was against changing schools at the time, as the year went on, I realized what a great move it was. I made two really good friends that year — Adam Burley and Allan Lutchmun. The three of us were pretty well attached at the hip for that entire school year. Unfortunately as years have passed, Adam Burley and I have lost touch in many respects. Let’s remember though that in 2018, Facebook is a good way to reconnect. Adam Burley and I are friends on Facebook. As for Allan Lutchmun, although we did lose touch for a few years, five or six years ago we reconnected; on yes you guessed it, Facebook. Since then, we have tried to see each other when we can.

So getting back to the task at hand, in September 1987, I discovered a band called Guns N’ Roses. Anyone familiar with their work? I absolutely loved their Appetite For Destruction album. I think it sold a few copies. In late December 1987, it was announced that a former member of Guns N’ Roses would be releasing an album with a band called L.A. Guns. I was instantly intrigued. Of course I told Allan and Adam about this new band and album. They seemed less excited about this band than I was. The video for a song called “Sex Action” would soon arrive on Muchmusic’s Power Hour. I was taken aback by their look and attitude. The music was raw and from the street. It had a certain swagger and attitude, very much like their counterparts Guns N’ Roses. Being a young metalhead, I needed to find out more about this band. Obviously, they were from the hair metal capital of the world — Los Angeles — but I needed to know the whole story. Who were they? What other bands did they play with? You know all the pertinent info that every hair rock fan should know.

In my research, I would come to find out that, the band’s lead singer was an English chap named Phil Lewis who had originally sang in the British cult band Girl that also featured Def Leppard guitarist Phil Collen. Now that’s cool I thought to myself at the time. Lewis had replaced former L.A. Guns singer Paul Black months before the recording of the album. Black is actually credited with writing many of the songs on the debut album. I would then come to find out that bass player Kelly Nickels, the coolest of all the guys in the band, had previously played with Faster Pussycat, but due to a major leg injury he sustained in a motorcycle album, he was let go by the band, which led him to L.A. Guns. At the time, my research was paying off and it was becoming very obvious that this was one very cool band, but the icing on the cake would be coming to learn who played drums in the band. The ever so famous Steve Riley formerly of L.A. shock rock legends W.A.S.P. Unfortunately, Riley didn’t actually play on the album as that task was handled by the band’s former drummer Nickey Alexander. Still regardless, Steve Riley in L.A. Guns — I’m sold, I have to buy this.

From what I recall of the events leading up to the purchase of the album, I am sure it was a Saturday. I asked my Mom to drive me to the mall to get my latest obsession. I just remember my thoughts when I saw the album on the shelf for the first time. Holy shit look at that cover! It looked like a police badge on a black background with the name L.A. Guns draped across the badge. Two guns on either side within the badge with a skull in the middle and just below that the skyline of Los Angeles. Then I picked it up, there on the back was a photo of one of the coolest bands I had ever seen. There was Phil Lewis, dead center holding an attack rifle. The rest of the guys sitting, glaring straight ahead at you, like they were ready to kill. They looked like a street gang of bikers who at any time could snap your spine in half. Holy shit, I love this!

I quickly grabbed the album and made my way to the counter to pay. Then it was off home to drop the needle on the vinyl. “Mom, can’t you drive any quicker, I need to hear this? Seriously? Get me home.” When we finally arrived home after a long, agonizing ten minute drive, I quickly dropped the needle into the groove. What I heard was powerful, aggressive street rock n’ roll. “No Mercy” kicked the all-out attack off nicely and then “Sex Action.” “Oh this is good” I thought to myself. When it came to the next song “One More Reason”, I was totally sold. This song scared the crap out of me. Hey I was a 13 year old kid. “Give me one more reason to die.” Now that’s a bold statement. “Electric Gypsy” then started with a cool guitar riff that instantaneously caught your attention. Lewis’ vocal approach on this song really captured the essence of the whole song. “Nothing To Lose” ends side one. Punk flavored, but still a melodic song that featured horns, kind of in an Aerosmith sense, with an Alice Cooper trashy type vibe. The perfect formula for success.

“Bitch Is Back” starts side two and does not disappoint. Hey, I’m 13. At the time, every girl is a bitch. So I can totally relate. I just loved hearing the word in a song. You know how they sometimes say in the music business; it’s about being at the right place at the right time? It’s all about timing. Well, L.A. Guns timed this one perfectly. This would become my new anthem. “Cry No More” was one that I preferred to skip. An acoustic instrumental on a heavy album? WTF? But I endured the short segway into “One Way Ticket.” This was a ballad of sorts I guess, but more of an Aerosmith type composition, kind of in the vein of “Seasons of Whither.” “Hollywood Tease” would really bring the album back to life, not that “One Way Ticket” brought the album down, but this song oozed of coolness. Originally recorded by Phil Lewis’ band Girl on the band’s debut album. A really cool rendition very reminiscent to the original. “Shoot for Thrills” and “Down In The City” both have a perfect sleaze rock feel to them and really add a nice depth to this already amazing piece of ’80s rock history. The perfect ending.

Of course, I would listen to this album many more times throughout the weekend. It was winter, what else is there to do but sit in your bedroom, rocking out to tunes? As Monday morning approached, I decided even though I could not listen to my latest acquisition at school, I could sure show it off to my classmates. There would be lunch time, when we would go to Adam Burley’s house because his parents were at work and rock vinyl on his turntable — which of course we did. As we put the needle down once again, I was astounded to find that my friend did not have the same enthusiasm that I did for this new release. You win some, you lose some.

As I look at this album 30 years later, I can’t help but think of how solid it really is. At the time, it was pretty much the standard for what was coming out. It did have a Guns N’ Roses feel to it, but was not a direct copy. There were moments where you could say, “Yeah, I can make the comparison” but overall it stands on its own. I do wonder about some things in terms of this album though. Phil Lewis is the first that comes to mind. Was ousting Paul Black and getting Phil Lewis a tactic by the record company to sell more albums? My understanding is that Paul Black had a substance issue that led to his demise, but is that really the true story? What about Steve Riley? Was this yet another attempt to put another established name in the fold to generate success? With all the turmoil that has surrounded this band over the years with the constant member changes, it really leads me to believe that possibly L.A. Guns at the time was a band put together to coincide with the success of Guns N’ Roses. Although the band did exist on the L.A. Strip, it just wasn’t totally in the incarnation that appears on the album. Many others did the leg work, but the members who followed would generate the success. Hey, this is all in theory and my opinion, but looking at it in the big picture, I think someone, maybe Tracii Guns for instance needs to write a book to really give us, the fan the whole story. Inquiring minds want to know!!!