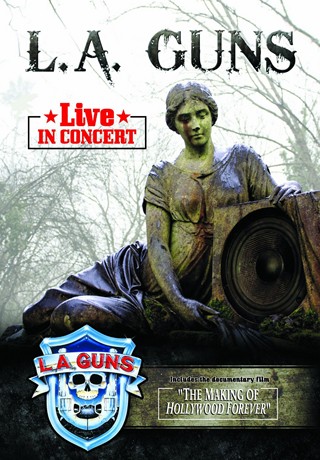 Review:
L.A. Guns released one of the best of albums of their career in 2012 with Hollywood Forever. So, how do they follow up such a stellar release? Well, they unleash an equally as strong DVD of course. Titled Live In Concert, this release captures L.A. Guns‘ May 12, 2012 performance at Maryland’s M3 Festival. Unlike the HDNET TV broadcast of their set, this DVD includes all nine tracks the band performed that day.

You probably imagined that the band’s setlist was comprised mainly of hits from the ‘self-titled’ and Cocked & Loaded albums — and this is true. Early staples included in the performance were “Sex Action”, “Never Enough”, “Sleazy Come, Easy Go”, “Electric Gypsy”, “The Ballad Of Jayne” and “Rip N’ Tear”. Also represented are “Revolution”, from 2005’s Waking The Dead, and “You Better Not Love Me” and “Sweet Mystery” from the Hollywood Forever album. L.A. Guns provided a fiery performance and shined on the big stage. These days a band like L.A. Guns doesn’t get very many opportunities to showcase skills to several thousand people rather than a couple hundred. No matter, the performance was the same — gritty, in-your-face and magnetic. Phil Lewis shows that his voice still has the raspy, smoke-filled, and whisky-soaked imperfections which have given it character and distinctiveness over the years.

It must be noted, for those that are unaware, that drummer Steve Riley and singer Phil Lewis are the sole remaining members from the band’s glory days. Joining the duo on this DVD were bassist Scotty Griffin and guitarist Stacey Blades (who recently left the band). It’s unfortunate that the band and Blades have parted ways as he brought stability to the group and now they must start over with someone else.

In this day and age extras are mandatory for DVD releases — Cleopatra Records included an audio disc of the live show, Hollywood Forever video clips and a look behind the scenes of the making of their latest album. Live In Concert is essential for die-hard L.A. Guns fans but with this track listing there’s no doubt that even the most casual of fan will get a rise out of this collection.