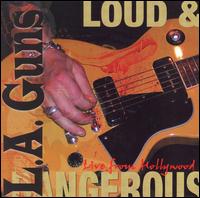 Review:
L.A. Guns are back with another new CD in 2006. This time it is a live effort featuring all the classics plus a DVD bonus which features some of the new songs off 2005’s Tales From The Strip.

Why did this CD come out? For a few reasons, I believe. First, L.A. Guns is known as one of those bands you should go see live because they put on a very fun show. Their stuff just translates well live. Simply put, gritty L.A. sleaze rock has never been done better by a better band. Second? Well, Phil Lewis said in an interview last time around that they would not be wasting another new record on their current label as he was not very satisfied with the lack of promotion for Tales From The Strip. So, everyone’s happy! We the fans get a great live record by a great live band and the band meets their obligations to their label.

Phil Lewis, Steve Riley, Adam Hamilton, and Stacey Blades really show their great live abilities on this live disc with a pretty diverse collection of songs. While the other band calling themselves L.A. Guns travel around playing only the stuff that was written 20 years ago, the real L.A. Guns combine a career spanning collection of songs into one great live disc.

There are a few surprises on this disc. For example, Stacey Blades tests out his vocal abilities on a track originally sung by Kelly Nickels on L.A. Guns‘ Vicious Circle CD titled “Nothing Better To Do”. The result? He does a really good job with it. It is a great live song to do as we found out on A Night On The Strip a few years back.

Another surprise is the track “Rock N’ Roll Outlaw” off the 2004 Rips The Covers Off CD. Those who have attended live L.A. Guns concerts since that CD was released know that is a track they like to do live and having a live version of it is pretty cool.

The expected is also on this disc. Of course you have got your “Electric Gypsy”, “Never Enough”, “Rip N Tear”, “One More Reason”, “No Mercy”, and “Ballad Of Jayne”. I think those are pretty much givens for live L.A. Guns material, and they sound great.

The multimedia tracks are two videos of songs from Tales From The Strip. Those two tracks are “It Don’t Mean Nothing” and “Hollywood’s Burning”. Personally, I would have loved to have heard “It Don’t Mean Nothing” done live on the CD portion of the disc. But this is the first time that I am aware of that L.A. Guns appears on anything that can be considered a DVD unless you are talking about bootlegs. So, for that novelty, it’s cool to have.

Overall, Loud & Dangerous is a good live album by a great band. It is something that you can pop in and be taken away for an hour to a time when musicians actually had enthusiasm and music wasn’t more girly than a teen love story. Its kick ass rock ‘n’ roll the way God (or another biblical figure) intended!