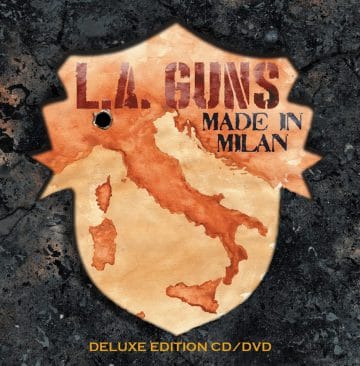 Review:
It’s hard to believe that L.A. Guns have replaced their “second” guitarist three times since the release of their latest live album Made In Milan back on March 23rd of this year. In fact, guitarist Michael Grant didn’t even make it to the release date of Made In Milan since he left or got fired from the band about a week before the album’s release. There have been so many changes to L.A. Guns‘ sidekick guitarist position that as I was writing this review, I almost forgot that Johnny Monaco had a very short stint in the band. So to recap, Grant was gone in mid-March and replaced by Monaco at the end of March, former L.A. Guns bassist Adam Hamilton took Monaco‘s spot in mid-June, and Faster Pussycat guitarist Ace Von Johnson took Hamilton‘s spot for “longer tours” starting in mid-September.

The sad part about the musical chair game that was played (or perhaps is still being played) by L.A. Guns for that second guitarist position, to back up band founder and lead guitarist Tracii Guns, is that Made In Milan didn’t really get the proper recognition that it deserved. Why promote a live CD/DVD that has a former guitarist playing on it? On top of that, the former guitarist (Grant) apparently left on bad terms. So what should have been the celebration of arguably the second best line-up ever assembled by L.A. Guns — Guns and Grant on guitars, Phil Lewis on lead vocals, Johnny Martin on bass and Shane Fitzgibbon on drums — was released and seemingly forgotten as soon as the CD/DVD dropped. Grant was already stealing the show at L.A. Guns gigs prior to Tracii Guns‘ return to the band and although Grant seemed to hold himself back with Guns back in the line-up, L.A. Guns boasted a formidable one – two punch on guitar. I know because there was magic in the air when I first saw the line-up at the Rock N Skull Festival back in October 2016. Sure, the “magic” was essentially the reunion of Lewis and Guns together but Grant was also in the line-up that night and put on a great performance. It’s also worth noting that Grant was part of the line-up that released arguably the third best ever L.A. Guns album — The Missing Peace — after the band’s debut (1988) and Cocked & Loaded (1989) of course.

Made In Milan is actually a really good live album. Not many bands that have been around for over three decades can say that they arguably sound better live now than back in their early days but L.A. Guns certainly can. Phil Lewis sounds fantastic on Made In Milan and unlike many of his counterparts in their 60s, his voice is like a fine wine and seemingly gets better with time. Guns and Grant sound spectacular on Made In Milan. I suspect that Guns got to play more lead than Grant based on what I saw when I caught that line-up playing live. The rhythm section of Martin and Fitzgibbon is rock solid and provides the canvas for the bigger stars in the band to shine. L.A. Guns play their songs a touch faster live (just like KISS used to do compared to their early studio album efforts) and Made In Milan perfectly captures that faster intensity and pace just like Alive! and Alive II did for KISS back in the day.

Whether you’ll think that this is the ultimate L.A. Guns live album will largely depend on what you think of the setlist for the album. As you’d expect, L.A. Guns‘ debut self-titled album is very well represented with four songs (“No Mercy,” “Electric Gypsy,” “Sex Action” and “One More Reason”) and a bonus track “(Bitch Is Back”) on the DVD. It’s a pity that “Bitch Is Back” only made it to the DVD and not the CD. I don’t understand the rationale behind that one. Cocked & Loaded is equally and understandably well represented with four tracks. While I totally appreciate that the anthems “Never Enough” and “Rip And Tear”, and even L.A. Guns‘ “hit” ballad “The Ballad Of Jayne” are part of the setlist, I don’t get and am quite disappointed that “Malaria” was resurrected into the band’s setlist with Guns‘ return. There are simply so many better songs that could be played than the almost dull “Malaria.” Hollywood Vampires (1991) also gets the nod with two songs “Over The Edge” and “Kiss My Love Goodbye” — two solid songs that are worthy of the L.A. Guns‘ setlist.

“Killing Machine” from 1994’s Vicious Circle seems to have been resurrected since Guns‘ return in the line-up and that’s a shame because the song just doesn’t stand up to a lot of other songs that L.A. Guns could play. I get changing the setlist around but that one just doesn’t do anything for me. The “Jelly Jam” which consists of extended guitar solos from Guns and Grant was disappointing to hear live back in April 2017 and just as disappointing on the CD/DVD Made In Milan. What a waste on what could have been the ultimate L.A. Guns live release. It is nice that 2002’s Waking The Dead got some recognition as the opening track on that album “Don’t Look At Me That Way” was included on the live release. Rounding out the setlist is a track that is sure to be a mainstay in L.A. Guns‘ set for the rest of their music career. “Speed” was included even though The Missing Peace had yet to be released and has proven to be one of the best songs that L.A. Guns have written in over two decades.

Overall, I am happy that Made In Milan got released because it captures live what I consider to be the second best line-up ever assembled by L.A. Guns after the line-up of Guns, Lewis, Mick Cripps (rhythm guitar), Kelly Nickels (bass) and Steve Riley (drums) that released most of L.A. Guns‘ most memorable records. I rank Made In Milan right behind 2000’s Live: A Night On The Strip in terms of L.A. Guns‘ many live releases. Had the setlist been a tad better, Made In Milan would have likely become my favorite L.A. Guns live album. In any case, Made In Milan is well worth the money and proof that L.A. Guns have not slowed down in the least despite playing for more than three decades.

Subscribe To Be Alerted When We Add New Videos – http://radi.al/SubscribeFrontiers / From the album MADE IN MILAN. Autographed copies, vinyl, t-shirts and mo…