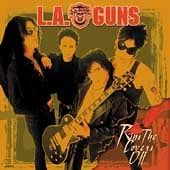 Review:
L.A. Guns is a band that is as raw as Guns N’Roses and as pop metal as Poison yet never seemed to enjoy the depth of success those two bands enjoyed. Why? Bad promotion? Not shaking the right hands? Who knows? The bottom line is this is a band that should not be ignored. And, I’m not ignoring them!

After their last two new studio albums blowing me away, I was sad to hear Tracii left L.A. Guns to look for a “better gig” and now finds himself with Nikki from Motley Crue in Brides Of Destruction. But, the remaining Guns have continued shooting away and I think a few of these shots hit the target nicely.

The album opens up with “Rock And Roll Outlaw” originally performed by Rose Tattoo. First, the production sounds great, as does the band – this is very Hollywood Vampires quality. This also translates well live as they performed this and the next cut live a few weeks ago when I caught the guys in Arizona.

Second is “I Just Want To Make Love”, a Foghat cover. This, for my money, is the best song on the record. Stacey Blades, the new guitarist, sounds fantastic here. I wonder how Tracii feels being replaced with someone who can come close to filling his shoes? Maybe he’ll write a poorly produced punk song about it for the next Brides flop.

“Tie Your Mother Down” by Queen is next. Pretty cool. Warrant did this on their cover record a few years back – Guns have a bit of a different take on it. Either way, it rocks!

“Nobody’s Fault” by Aerosmith is next. Basing the review of this song on Aerosmith before selling out, it’s cool. But, I would like to live in a world free of rap, boy bands, and annoying pop divas being used to save a fading career.

“Custard Pie” by Led Zeppelin is next. Anyone who likes Led Zeppelin should check this one out. Those guys inspired so much of the metal scene for years to come. It’s cool to see the Guns paying tribute to them.

“Moonage Daydream” by David Bowie is up next. Bowie was one of the original kings of Glam. I’m not a big fan but I do have respect for the road he paved. That said, I’m not overly crazy of the song. The boys sound good but you can’t make chicken salad out of chicken droppings.

“Search And Destroy” by Iggy Pop is the final cover on the record. This is back to what I want to hear. Good stuff! Chicken salad all the way!

The album closes out with two live cuts of songs from Waking The Dead, the studio released Guns record of 2002. That album is incredible, these covers are okay. It is not recorded as professionally as the tracks off Ultimate L.A. Guns but it still sounds okay. The songs are “Revolution” and “Don’t Look At Me That Way.” A nice bonus!

Great guitar work by Stacey Blades and the incredibly talented drums of Steve Riley along with the bombastic bass of Adam Hamilton and the big voice of everyone’s favorite vampire, Mr. Phil Lewis create something special here. I’ve read reviews on boards saying the Guns are dead because Tracii left. Trust me, Tracii will regret leaving. Yes, the man can play – but the Guns march, or shoot, onward. God bless old school metal! I give the album 4 gunshots – take away “Hurdy Gurdy Man” and you’ve got 5!