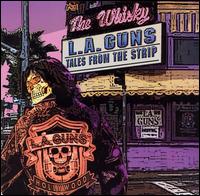 Review:
I looked forward to picking this CD up with such anticipation, I actually bought one on Amazon on August 12. But, I just couldn’t wait those few extra days and ended up buying it at the store as well to hear it a second early. Do I regret it? Not at all!

What can I possibly say about this record other than the standard, “It rocks, dude?” Quite frankly, that sums it up. But, let me get into more detail about what is so great about this record.

First, every song is at least good. Some are better than others but there isn’t a stinker on here that will require you to get up and change tracks because your ears are bleeding.

The best songs off the record, or at least the ones that jump out at me at this moment after having listened to it all the way through 3 times, are the opening track of “It Don’t Mean Nothing,” “Electric Neon Sunset,” “Gypsy Soul,” Skin,” and “(Can’t Give You) Anything But Love.” But, no song is “bad.” As a matter of fact, I chose those songs because they are the ones that I most clearly remember. Any song could really be my favorite off the record.

Some are concerned about the lack of Tracii Guns on this record. I say, “Tracii who?” Tracii‘s off trying to be modern and performing piss poor punk music in South America somewhere. Tracii‘s a great guitarist, don’t get me wrong. But, as much as I pick on Steven Tyler for being vocally shot, Tracii Guns is creatively shot and it’s a real shame. But Stacey Blades fits the bill nicely and damn does he play a mean guitar.

Yes, all you ska and punk fans, this record has guitar solos! Guitar solos are instrumental solos performed by good musicians that add to the songs. I think the lack of guitar solos in the modern rock scene is directly related to the lack of talented guitarists. Stacey‘s got all the talent in the world!

Is it better than Waking The Dead? I can’t say yes and I can’t say no. It’s simply different. Waking The Dead was a slightly more modern record and, at times, a slightly heavier one. Tales From The Strip is still heavy but sounds more like what most of us remember L.A. Guns as being. I love Waking The Dead and also love Tales From The Strip. How neither of these records were blockbuster hits is beyond me. Or, maybe they’re just too good and piss poor bands like Jimmy Eat World would be exposed as piss poor in comparison.

The last song on the disc is “(Can’t Give You) Anything But Love.” It’s clear to me that a lot of love went into this album. And, they did give me something better than love. They gave me a fantastic album that you all should buy. They gave me and all of us, Tales From The Strip! www.laguns.net.