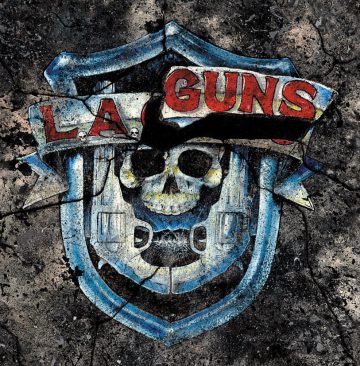 Review:
L.A. Guns are one of my favorite bands of all time. From autographed posters on the wall to multiple concert t-shirts, I am a major fan of this band and have been a fan of almost all its forms over the years. The current form of the band has two important parts consisting of singer Phil Lewis and founding member / guitarist Tracii Guns. This is the first time the two have put out a new album together since 2002’s Waking The Dead album which, in my humble opinion, is one of the most spirited and inspired albums by a veteran band I’ve ever heard. But, it was upon the release of that album that the shit hit the fan with this band and it split like an atom into two parts. Do I really want to go into all of that? Maybe a little.

Since Waking The Dead, Phil continued with the L.A. Guns name with the name co-owner Steve Riley releasing two original albums, 2005’s Tales From The Strip and 2012’s Hollywood Forever. Those records did not have Tracii on them. The first one was a solid release and had moments of greatness. In fact, my three page review of Tales From The Strip for Sleaze Roxx ended up printed, in full, in Stacey Blades‘ autobiography with no personal credit given to me whatsoever. Oh well. Hollywood Forever, on the other hand, had less by way of moments of greatness. Though there were a few initially good tracks, the overall release felt incomplete at times and the musical differences between the band members became more evident. There’d be a song where Phil would let loose on vocals and you’d get a proggy guitar solo that did not fit or there would be a sleazy rocker that would just feel forced. Not as good as Tales at all.

Meanwhile, Tracii went on to release a demo quality album with Nikki Sixx called Brides Of Destruction. He’d then reform L.A. Guns with various singers including someone he went to school with, Jizzy Pearl who sang for the band on the Shrinking Violet album in 1999, and even a woman who I won’t name both because I don’t know her name and because she was not worth mentioning. He also did other bands such as a band with Rikki Rockett called Devil City Angels and a proggy album called League Of Gentlemen or something like that. The latter was not at all in my interest base.

The two finally came together at a show in late 2015 and by the end of 2016, Phil had quit the Steve Riley version of L.A. Guns. It was clear Phil and Tracii would work together again. And, this is that result. So, here we are! The Missing Peace is the name of the new album and unlike Hollywood Forever, this one might not immediately hit L.A. Guns fans’ spot and fill them with that strange “this is what I wanted” feeling like that album did. I say that as a good thing. Because, that feeling faded fairly quickly when you started to feel like some of the songs on the album were either incomplete or light on content. This is a much more rich album when it comes to content both musically and lyrically. And, damn, does it ever grow on you!

“It’s All the Same To Me” is the opener and sounds like classic Guns N’ Roses meets classic L.A. Guns. Just a perfect opening track.

“Speed” is the second track. This was the first song they put out there from a live performance in England. Then, they did a music video for it. And, it still is one of the best things on the record. A very Deep Purple feel with a lyric even borrowed from “Highway Star.” This one has a lot of raw grit to it. Maybe a 21st century “No Mercy” from the self-titled album?

“A Drop Of Bleach” follows and is a more alternative sounding musically. This disinterests me. But, as the song goes on, it gets heavier. The guitar takes an incredible tone during the solo that has a unique feel and the chorus just seems to fit better at the end of the song moreso than at the beginning.

“Sticky Fingers” is a solid song but is one I tend to skip. It just feels lost in the album.

“Christine” is a ballad. A nice change of pace. It sounds a bit like “Crystal Eyes” off the Hollywood Vampires album but not like it at all. To most, that would not make sense. But, if you hear it, you know what I mean.

“Baby’s Got A Fever” is a more sleazy rocker in the style of “Hollywood And Vine” off the Hollywood Forever album. Much less forced, though.

“Kill Or Die” is where the album picks up again for me. With a grooving guitar beat, a different verse, and a different vocal approach in the lead up to the chorus by Phil that makes you think, “Holy shit, he can still belt it out!” This one has a great vibe. Grooving rocker that kind of gives you a vibe like “Some Lie 4 Love” or “Kiss My love Goodbye” off Hollywood Vampires.

“Don’t Bring A Knife To A Gun Fight” blows my mind. I mean, this is very heavy for L.A. Guns and not like the Vicious Circle EP. This is purely catchy heavy rock with incredible guitar, vocals, and a very catchy supporting backing vocal chorus. This is among my favorite on the album.

“The Flood Is The Fault Of The Rain” is a great rock song. But, many will compare it to the Animals‘ “House Of New Orleans.” Perhaps rightfully so. But, the song is incredibly catchy and fires on all levels. I just wish it wasn’t quite so close.

“The Devil Made Me Do It” takes “Don’t Bring A Knife To A Gun Fight” and takes it a step further on the heavy meter. This is the song that, for some reason, reminds me a bit of the Waking The Dead album. It isn’t that much like it. But, it has that punch and heavy feel. Very freaking cool.

“The Missing Peace” is a very well done song in the style of “Over The Edge.” Very well done. But, the next track takes this one to task.

“Give It All Away” is an epic song. It explores Tracii‘s incredible guitar playing and let’s Phil do his thing too. Very, very strong musical performance and a great way to end the album.

The second half of this album is better than the first… And the first half isn’t too shabby either. Bottom line? L.A. Guns have done it again. They rarely disappoint. But, with Phil and Tracii at it together again, there is a magic that just isn’t there without them together. They are each other’s missing piece… Peace?

L.A. Guns – “The Flood’s The Fault Of The Rain” (Official Video)