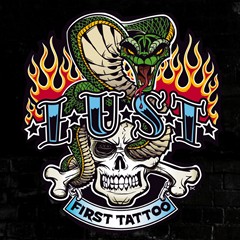 Review:
Proving that Australian hard rock doesn’t begin and end with AC/DC comes Sydney’s own L.U.S.T. On their debut full-length album First Tattoo this band displays more than just three-chord boogie, but retains the energy that is their country’s signature sound.

L.U.S.T.‘s youthful exuberance shows up on the punk infused opening number which finds the band barking “fuck you, don’t try and tell me what to do” during the chorus. While the group’s anti-establishment stance kicks the disc off on the right foot, the best is yet to come. “Runaway” is driven by a dark and memorable guitar riff and gruff vocals, “Rebel Rose” is a great groove laden track that screams ’80s with a hint of David Lee Roth swagger and “Fight Fire With Fire” successfully mixes sleaze with traditional metal. “I Wanna Get Drunk” is fairly straight-ahead and simple but would make a cool live anthem. “Bad Reputation” starts off with whispering vocals before shifting gears during the chorus, that change of delivery and tempo makes this song very enjoyable — “See You In Hell” on the other hand puts the pedal to the metal right from the beginning and refuses to let up. The best of the bunch though is “Gimme A Fix”, a flawless hard rock kick-in-the-ass that shows exactly what L.U.S.T. is capable of.

While First Tattoo is a great debut, not everything works. “I Don’t Wanna Be Your Friend” for instance drifts way too far into pure-punk territory (although it does include a guitar solo), which doesn’t appeal to me at all but should make fans of the Sex Pistols happy. Also the closing ballad “Too Much Too Soon” seems confused as to whether it wants to be Black Sabbath‘s “Planet Caravan” or a forgettable ’80s love song, and in the process it goes nowhere.

There are a lot of highlights on First Tattoo, and it makes for a great introduction to these hard rock newcomers. While L.U.S.T. are a little rough around the edges yet they have provided enough excellent moments to become a band to watch in the future. They have a great ‘screw you’ attitude, lots of energy and a handful of killer songs to back everything up.