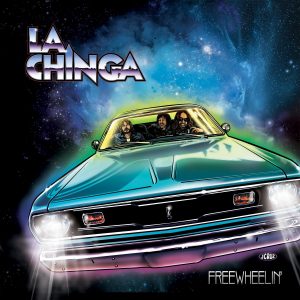 Review:
Hot on the heels of a killer interview with Sleaze Roxx, I offer this review of La Chinga’s Freewheelin’, so let’s get the deets out of the way first. La Chinga are a power trio from Vancouver, BC, Canada. They’ve been around since 2012 playing their own unique brand of rock, both in Canada and across Europe. La Chinga have had two previous releases, the self-titled 2013 album and 2015’s Pornostoros. As their bio says, “…where lost youths teemed in search of the true power of ROCK, three men chosen by occult forces too sinister to name rose up in answer to that dire and baleful call.”

This band is colourful if nothing else, and they are much more than that.  They are by no means death/doom metal, and I object to their narrow-casting of “stoner rock” by many media outlets. It simply doesn’t fit for a bunch of hard playing guys that perhaps Satan himself put together to do what they do best. As the band says, “You never get lonely baby, when the devil’s your friend.”

Freewheelin’ is one of those albums that makes it difficult to pull out a favourite song, or even highlight one over the other. Each track is solid in its own right, showing off different abilities and influences. Songs such as “Gone Gypsy” and “Stoned Grease White Lightning” are hard rock to be sure, but also seem to be rooted in ’70s blues rock. “Mother Of All Snakeheads” elicits more of a modern feel. “Right On” is pretty close to Monster Truck’s “Old Train” — if you like the latter, you will love the former.

“KIW” has a killer slide guitar and is very accessible overall. I can see why La Chinga says it’s a live favourite of theirs. “The Dawn Of Man” is a ten-minute opus, that I’m not sure I can wrap my head around. This is likely where the stoner/acid rock label comes from. Not sure about that one… I’ve made it through all ten minutes a couple of times, however not really sure what I heard. But I am sure about “Mountain Mama.”  Do I hear a mandolin? Check. A 12-string acoustic guitar? Check. A singer that is pulling off his best Robert Plant impersonation? Double Check. A solid tune that may just become my favourite album cut.

After a week of spinning Frewheelin’, and spending my weekend interviewing bassist/singer/groundskeeper Carl Spackler, I’m going to take a professional chance here. La Chinga could be the next big thing in Canadian rock if they play their cards right — following hard on the heels of other recent winners like Monster Truck and The Glorious Sons. The album sounds fantastic with high quality musicianship and terrific production values. La Chinga offer an original take on solid hard rock. Highly recommended listening for anyone looking for something fun and outside the mainstream.

Production:
Recorded and produced by Jay Solyom (1 to 7, 10)
Recorded by Eric Neilson (8, 9)
Mastered by Chris Goosman