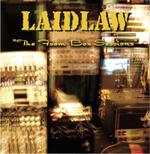 Review:
First off, I must state that The Foam Box Sessions by Laidlaw absolutely smokes. There hasn’t been a week go by since I received my advance copy of this album in early 2006 that I haven’t listened to it, some days it gets multiple spins. It is one of those roll the windows down, crank up the volume and put the pedal to the metal albums. It is timeless!

This album has it all, thunderous drumming, a dual guitar attack that will leave your head spinning, right in the pocket bass playing, out of this world vocal harmonies along with stellar songwriting above and beyond anything I’ve heard shoved through the radio speakers in several years. This album was recorded at ZZ Top‘s ‘Foam Box Recorders’ in Houston, TX and produced by the legendary Joe Hardy. Laidlaw is the only band to have made an album at Foam Box other than that ‘Little Ol’ Band’ from Texas themselves, ZZ TOP! You can definitely hear the band’s influences such as Led Zeppelin, Pearl Jam, Bad Company, Izzy Stradlin, Soundgarden, Lynyrd Skynyrd and The Rolling Stones shine through in their writing and musicianship, yet it doesn’t date the music, quite the contrary actually.

The Foam Box Sessions is as solid of a rock album as you can get…and then some!! Kicking things off is an “Intro” ripped straight from today’s headlines and slamming straight into “Revolution Is Coming”, this track features some Zeppelin-esque fretwork and background vocals by former Van Halen bassist Michael Anthony. “Let Your Love Light Shine” starts off with some tasty dobra licks courtesy of Craig DeFalco and quickly gets moving along, a standout track for sure. “Open Up Your Mind” is my favorite off of this album, featuring some great Thermin playing ala Jimmy Page and lyrics about losing someone very dear to you – vocalist Robbie Locke really shines on this track. “Swan Song (Tribute To Led Zeppelin)” will definitely make Led Zep fans happy as the band pays their respects to one of the finest rock bands ever. “War Machine” should be a Top 10 smash on modern rock radio one day, as Robbie really delivers all he’s got and more on this cut and Greg really knocks you out with his Bonzo inspired drumming. “Sunshine Woman” kicks into fifth gear and never lets up with some blistering riffs, some of the albums best fretwork is found on this cut which is available as a free MP3 download at www.laid-law.com.

Opening with a sweet harmonica riff from guitarist Brian Huffman, “Austin City Wendy” showcases some of the best slide work by Craig DeFalco since the late Duane Allman with the guitarists going balls-to-the-wall with a white hot guitar duel during the solo. How the next cut, “NASCAR Superstar” is not blasting over the PA of every NASCAR raceway is beyond me. This track is pure overdrive, a real scorcher! “Are You Living Your Dream” showcases DeFalco playing through a Leslie Speaker Cabinet on the half-time part. This cut also has some of the most heartfelt lyrics and will have you reaching for the Kleenex at its conclusion as you take a look around you and ponder. The next cut “Down So Long” features some really tasteful Bouzouki-work by Brian and equally impressive slide guitar, the vocals really shine on this track while Eric and Craig DeFalco swap their respective bass and guitar. “A Little Time” could easily be Laidlaw‘s ‘Sweet Child O’ Mine’! Producer Joe Hardy plays some beautiful mellotron parts throughout and his string section really takes this song to the next level, a sure-fire hit in my opinion. The band really shines as a whole on this track, and I could definitely see this track growing to epic proportions live, complete with lighters raised in an arena.

I highly recommend you grab this album. If the quality of the material isn’t enough to persuade you than the fact the album is only $6 plus $3.50 shipping should really persuade you to order a copy or two.