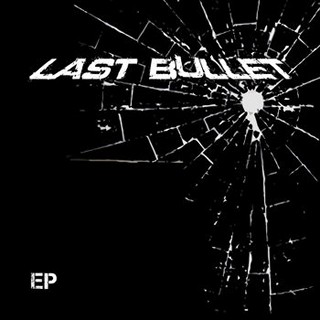 Review:
Whenever I receive a ‘free CD’ by someone after a concert, I readily admit that the chances of my listening to that CD are pretty slim — and if I do give it a listen, it better impress me right away or else it will find its way to the garbage can. After seeing Slash in concert in Toronto, I was handed a free album from a band named Last Bullet. I had never heard of them, and by the time I got to my car I had quickly put it aside to listen to the two new CDs that I had purchased from another local Toronto band I discovered that night, Diemonds.

A few days later I played the Last Bullet EP from the Canadian rockers, which consisted of five songs. Given the quick audition that the CD was going to get, it luckily started with a nice riff before jumping into arguably the fastest number on the album “Can’t Move On”. It is hard to describe the sound — sort of a more modern AC/DC feel with a younger and less raspy voice with (sometimes) story filled lyrics. “Can’t Move On” was essentially built on one great riff which goes right through the song. Next up is “Carefree” which is a lot slower tune. The vocals, when the song is at its slowest, aren’t great and show the vocalist’s limited tone. The song does not pick up until the chorus, but there are some catchy lyrics which are sure to get a ‘pop’ from a live audience such as, “We are the greatest f**king band that the world has even seen”. Although not my favorite when I first heard the EP, the song grows on me the more that I hear it.

“Girl’s Gone Wild” is probably my favorite out of the five tunes. Starting with a nice solo, the song jumps into a great riff and goes from there. The lyrics are sort of funny, giving the story of an office type girl “gone wild”. Unfortunately, the CD takes a turn for the worse with the slower “What Is Meant To Be”. The track puts the focus on the vocalist’s capabilities and, as stated before, he has a limited tone — best to skip that one. It becomes obvious that Last Bullet is better off sticking to their faster paced songs built on some strong riffs. The Last Bullet EP ends with “Rock ‘Til We Die” which goes back to the formula of building the song on a great riff. The chorus lends itself well to nice sing-a-long moments and probably works well in a live setting.

Last Bullet don’t offer anything really original with their five song debut EP, but with the exception of “What Is Meant To Be”, they do deliver with some solid rockers. I look forward to seeing them live and hearing what they can come up with next in terms of new material.