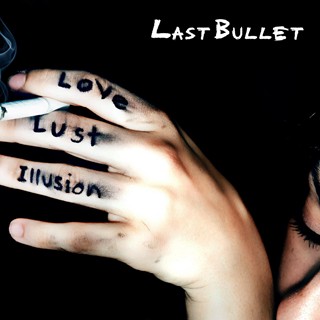 Review:
Never judge a book by its cover. I should have followed that old adage when I didn’t bother buying Last Bullet‘s latest CD Love.Lust.Illusion. when it first came out due largely to the front cover artwork that did not tickle my fancy and the relatively few songs on the album (six actual songs, given that “March Of The Cowboy” is really just an intro to “Cowboy”). I knew Last Bullet was a good band, but I underestimated just how good the Canadian’s follow-up to their self-titled EP would be. What a mistake that turned out to be because I was depriving myself of some kick ass rock ‘n’ roll for the months that followed.

Last Bullet‘s Love.Lust.Illusion. combines all of the elements of great hard rock into five rocking songs and one ballad. Once again, just like on their debut EP, Last Bullet built each song (aside from the ballad) on great riffs and Bryan Fontez‘s raspy vocals. That being said, the songs are not quite as simple as AC/DC but have that straight-forward edge with often different tempos on most of the songs. You can’t help but sing along with Fontez and have some part of your body move to the beats of the songs.

The CD kicks off with a great riff on “State Of Confusion” before giving the spotlight to Fontez‘s vocals, who gives the full range of his voice by hitting the high notes with a falsetto pitch. The song has a definite Led Zeppelin feel to it with great vocals, awesome riffs and some nice solos. Next up is “Jet” which is straightforward rocker with more music and tempo than its predecessor. The song has some witty lyrics, with one part of a verse stating “have you met my drummer yet?”, presumably to rhyme with “Jet”.

The intro riff to “Forget The Rest” could easily be found on any AC/DC record. This is one of those tracks where your head just can’t seem to stop bopping to the beat. Lead guitarist Brenden Armstrong is in fine form on this track with some quality solos. “March To The Cowboy” would presumably be used as the intro to the band’s live show, but it’s positioning on the CD as the fourth track is a little odd given that it would have worked out quite nicely as the opening cut. What follows is the best song on Love.Lust.Illusion., “Cowboy”. Combining the best elements of the Last Bullet EP and Love.Lust.Illusion., “Cowboy” is the ultimate Last Bullet song in my book. “Runnin’ Out Of Time” is another great track with the chorus sung alongside the riff before the album closes with the ballad “Love Song To Rock”. I readily admit not being that fond of ballads and this song just does not do it for me. It is not a bad ballad, but what I have found myself doing is simply stopping the CD at that song and starting the disc over.

What makes Love.Lust.Illusion. so good is that the songs are simple (and pretty short) yet ooze tons of attitude and swagger — this is what hard rock is all about. Pick up this CD, you won’t regret it.