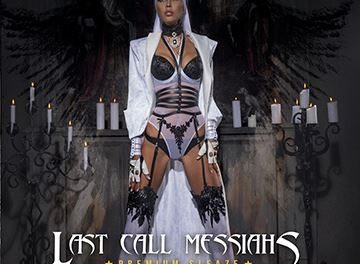 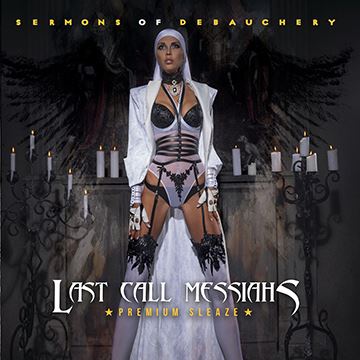 Review:
Last Call Messiahs have an unfair advantage with their debut full-length album Sermons Of Debauchery. Four of the nine tracks are on Last Call Messiahs‘ debut self-titled four-song EP, which went on to finish as the #9 album on Sleaze Roxx’s Top Ten Albums of 2014. Now, the four tracks in question have been remastered but truth be told, I haven’t noticed that much difference between the original versions and the remastered ones except that the latter sound richer. That being said, I did not bother listening to the original and remastered version back to back to be able to identify any true distinctions. There is no point rehashing the four remastered tracks — “Sinner’s Swing,” “Hollywood & Vine,” “City Of Trash” and “Last Call Messiahs” — except to say that I really liked them when I heard them in early 2015 and still do to this day.

Since the release of the Last Call Messiahs EP, the group has sustained some considerable blows to its line-up with two of the founding members and the rhythm section — bassist Stephen Blasko and drummer Chuck Tipton — leaving the group. They have been replaced by bassist Bill Jackson and drummer Dee Williams who do an admirable job and frankly, I don’t notice any difference in the sound with the line-up change. Lead vocalist and rhythm guitarist Chris Clark and lead guitarist Jeff Young have decided to forge ahead with the band and are the most identifiable components that bring the Last Call Messiahs sound. Clark‘s squealing / singing is hard to duplicate giving Last Call Messiahs quite the identifiable and original sound.

So how do the five new songs fare? Although all five of the new songs are solid ones, I find that two stand out while the other three are enjoyable but not spectacular. The two stand outs are the riff based “Body Electric” and “So Far, So What.” “Body Electric” seems to drip with sleaze and swagger, and just never lets up with its cool groove and feel. “So Far, So What” is just a solid rocker from start to finish with some very early Peter Criss era KISS like drumming just before the guitar solo. The remaining three songs — “Hollywood’s Screaming,” “Wonderland” and “Man’s Ruin” — are all enjoyable but all seem to miss that big chorus, which would help to distinguish the verses from the chorus to take each of the songs to the next level. It just seems that the latter three songs stay constant at one level without really switching gears.

Overall, Sermons Of Debauchery is a a solid album that will likely satisfy any lover of sleaze rock. Clark‘s voice just seems tailor made for sleazy down n’ dirty songs and Last Call Messiahs have a knack for coming up with some cool guitar riffs and melodies.