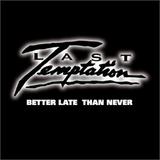 Review:
After the successful release of Marcello/Vestry last year, which Sleaze Roxx readers voted one of the top CDs of 2008, what better time for vocalist Frank Vestry to resurrect his old band Last Temptation? This ‘new’ album contains tracks originally recorded back in 1989, and listening to Better Late Than Never raises the question, how did people miss out on this band back then?

This CD contains everything that was popular in the late 80s – the big-hooks, strong melodies and memorable choruses. If one were to teach a college course on the sounds needed to achieve massive success during rock’s late 80s domination, all they would have to do is present this album to the class. And twenty years later these songs still sound great, sure it’s a step back in time, but doesn’t sound dated at all.

What do I hear while listening to Better Late Than Never? I hear traces of bands such as Tesla, Tora Tora, Hurricane, Y&T, Saraya, Flame and many more – in other words a mixture of what made the hair revolution so great. The songs represented here fall on the heavier side of melodic rock, nothing more and nothing less. This is one of those discs in which you can play any track and find a winner, but the stand-outs for me are “Break It”, the title-track, “Without Love”, “Oh So Easy”, “Save Me” and “Ice Queen”. But like I said, you can’t go wrong with any of the ten tracks here, they are all exceptional slabs of melodic hair metal.

Better Late Than Never is an appropriate title, as this shouldn’t have taken twenty years to properly release. You also can’t help but wonder how successful Last Temptation would have been with the right push back in the day, because these guys had everything that made others multi-platinum success stories. As an added bonus, for a limited time the band will donate proceeds from sales through their website to the SCO Family Of Services…so buy it before the end of December.