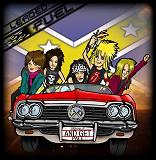 Review:
The Swedish sleaze/glam scene is expanding further with each new debut release, this time it comes from Leaded Fuel. While bands like Crashdiet and Crazy Lixx prefer the more polished arena-sound, Leaded Fuel tend to have an energetic, punk-influenced sound and definitely a rawer edge more like Vains Of Jenna. The band had a three track demo up on Myspace in the spring of 2007 and now here they are, already delivering their debut on the upcoming Italian indie label Costa Ovest.

After the engine is put into gear, the song “Leaded Fuel” kicks in with an irresistible riff. Liz Lascivious‘ voice is at first quite repellent, but after some spins I must say that it actually adds to the voluntary decadent feeling that Inhale And Get Pale has. Man, this is the soundtrack for a stroll down a deserted alley around midnight, dead drunk and wasted. Not to say that it’s all about attitude, as the songs are there as well. Songs like “Hotstage Situation”, “Yeah! You Bother Me” and “Max Rear Traction”, amongst the already mentioned opening track, all kick major ass. In between they slow things down with the acoustic driven “231 Miles”, which could have been an old Hanoi Rocks song.

While this is a very cool record, which should appeal to all lovers of Dogs D’Amour and the already mentioned Vains Of Jenna, there are some critical points, which they hopefully manage to merge out on the follow-up. My first complaint is the song “The Way We Are”, which to my ears is pretty horrible and doesn’t really bring justice to the other nine songs on Inhale And Get Pale. The songwriting could be a bit more diverse in my eyes as well, with maybe a few more twists concerning structure.

All in all Leaded Fuel are another very promising band, which with just a few little tweaks and turns in the songwriting department could easily end up as big as Vains Of Jenna. Go and support them!