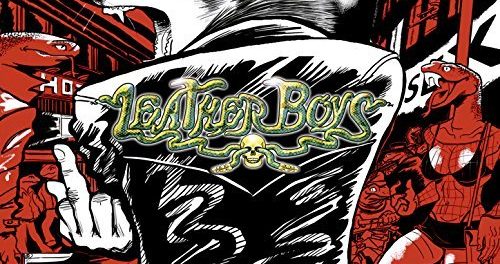 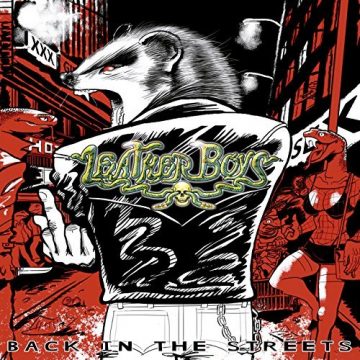 LEATHER BOYS
BACK IN THE STREETS
Released on December 1, 2014 (Rock CD Records)

Review:
Sleaze Roxx readers — as requested what follows is a review of a sleaze rock band. Yes! That’s right — an album of 100% pure unadulterated sleaze rock n’ roll. Dripping with the swagger and sex that brought of us all here. Now as many of you all know, I am a selfish bastard. Sure, I appreciate a good band and of course a great album when I hear it and sure, I will let all my secret stash bands out eventually as that is where my joy lies — getting great bands, especially great never to be known bands, some well deserved attention. That said, I have been sitting on this band for about a year now. Well, not sitting on them but playing the frickin’ crap out of this long play and the band’s previous 2011 effort appropriately entitled Real Leather. The album in question for this write up is entitled Back In The Streets. The album is essential and the band is Spain’s Leather Boys!

Leather Boys — and yes they have “electric toys” — have been knocking around the streets of Aviles since 2006 where Luis Miguel Diaz Valdes (Leather Rose) and Luis Alberto Herrero Sariego (Leather Sex) met and began their collaboration. This would, in 2011, bring forth their first long play garnering immediate local appeal and in turn cementing their brand known as “Leather Rock” and in turn their homage to The Ramones in their stage/band names. With massive nods and equally large influences by bands that fueled the sleaze and glam metal explosions of yesteryear such as Guns N’ Roses, Mötley Crüe, KISS and even Metallica, Leather Boys forged forward with the late 2014 release of Back In The Streets.

Back In The Streets is a sleaze lover’s wet dream. I kid you not. Twelve tracks slathered with attitude and completely bathed in sleaze. From the album’s opener “Leather Gunner,” you are pummeled with an impressive array of licks and lyrical content that could easily be found on L.A. Guns‘ debut release and this is just the opener. As the disc moves forward, the nods to the who’s who of influences is staggering and impressive. You can’t help but think of bands like Junkyard, Sea Hags, Guns N’ Roses, Hanoi Rocks, Tramp Alley and Tigertailz and newer acts like Julian Angel and Undone to name a few. “Cries In The Night” is a favorite with its hook laden chorus, but who am I kidding, they all are essential and the CD player’s skip button is all but forgotten and will never be associated with this release. “Butterfly Wings” is an essential arena rock ballad that mashes together “Goodbye To Jane” and “November Rain” for an impressive result. The band is a juggernaut of excellent song writing, musicianship and raw talent. I can’t stress enough how cool they are and how awesome this record is.

Wrapping up, do yourself the favor and hustle on over to Leather Boys‘ website and buy up their wares before they are obsolete. You will not be disappointed and I assure you Back In The Streets will stay in heavy rotation and will place itself firmly in your “go to album” list for years to come. It appears great things happen every three years and if history has anything to do with the Leather Boys‘ releases, I am anxiously awaiting the 2017 release of their third album.

Leather Boys ‘Leather Gunner’ taken from the album ‘Back in the streets’ – released December 20th 2014. DIRECTED BY TITI MUÑOZMusic:SexLyrics:RoseListen and …