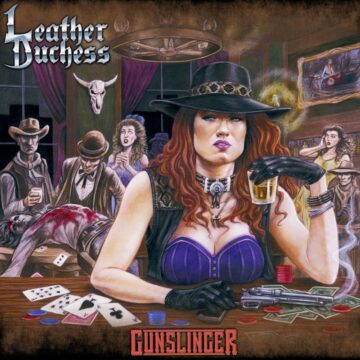 Review:
Leather Duchess — where have you been? Had Leather Duchess‘ very fine debut album Gunslinger crossed the Sleaze Roxx headquarters a couple of years ago when it was first released, there is no doubt in my mind that it would have been contending for the Sleaze Roxx’s Top Ten Albums of 2018. I do hate it when that happens. A really good album fell through the cracks and didn’t get considered at the right time. From what I can tell, Leather Duchess‘ album Gunslinger was first released in 2018 and later remastered and released on vinyl via Revolt Vinyl Records in 2020. And let me tell you, the vinyl album is a thing of beauty. You can tell a lot of care went into putting the final product together. It makes you long for the days when vinyl was the medium of choice when it came to purchasing and listening to music.

Putting aside the stellar packaging, Leather Duchess have some great musical chops as well. Think of the album that you would really like Dangerous Toys to come up with, and that’s what Leather Duchess offer in a nutshell. Unfortunately, the new Dangerous Toys album seems to be very slow in coming together so I can’t think of a better way to wait for it than to crank up Leather Duchess‘ very good record Gunslinger. The album opens with a Western cowboy type of intro before the title track comes blaring through. “Gunslinger” reminds me quite a bit of Cinderella‘s Long Cold Winter album with the bluesy licks. By the time “Machine Gun Charlie” comes on, I’m thinking that Dangerous Toys frontman Jason McMaster is handling the lead vocals but no, it’s Tyler Heath who actually took some vocal lessons from the man himself. It’s kind of hard to make out what Heath is singing at times but does that really matter? A great voice is a great voice. I suppose that’s what the lyric sheet is for.

Rounding out the band on the debut album is guitarist Marc Edgar and drummer / producer Jake Wolf. Both Edgar and Wolf handle the bass duties on the record. The guitar work is very solid in that the playing is full of melody and not overplayed but yet still has a real piss and vinegar feel to it. I can’t say that the rhythm section really pops out on the record but really that’s the way I like it. I’ve always viewed the rhythm section as the foundation for the guitars and vocals to shine, and Wolf and Edgar deliver the goods in that regard. Although Leather Duchess definitely excel at the faster paced in your face Dangerous Toys type tunes, they also can slow it down with some nice melodies like on “On My Knees.” It’s hard to pick my favorite on this album because all of the songs are really good except for the slower closing number “Let Me Roam” which ends the record on a bit of a weak note with its vintage Cinderella bluesy feel.

Although Sleaze Roxx clearly missed out on a gem of a record for a couple of years, the great news is that Leather Duchess are getting set to release their next album later this year and there is no need to say that I’m really looking forward to that release. If you had to pick a poster band to represent Sleaze Roxx in terms  of music, attitude and look, Leather Duchess might just be the right pick. Check out Leather Duchess‘ album Gunslinger. I am quite confident that most Sleaze Roxx readers will dig it.