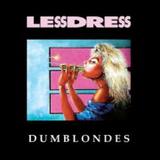 Review:
Dumblondes may be the biggest surprise of 2008. For some reason I envisioned Poland’s Lessdress to be a keyboard infested AOR band – needless to say I was completely off the mark. The band does in fact have a keyboard player, but this CD is pure sleaze metal, not unlike that of Shotgun Messiah, Nasty Idols, Sven Gali or an early BulletBoys.

I can’t think of any other sleaze bands from Poland, but if there are they’d be hard pressed to top Lessdress. In fact I’ll go so far as to say that these guys could hold their own with anyone in the hard rock genre. Dumblondes was originally released on cassette (only) way back in 1989 and I’m sure their location was the only thing that stopped Lessdress from becoming household names back then. Twenty years later (and in my opinion twenty years too late!) the remastered CD has been dropped upon us, and judging by these 11 tracks it was well worth the wait.

There isn’t a bad song to be found on this release, right from the opening riff of “Heatwave” to the final screams of “Frisk Me”. You’d never guess that English wasn’t vocalist Pawel Nowakowski‘s mother tongue, because he sounds like he came right off the Sunset Strip with just the right amount of grittiness and attitude.

Among the best songs represented on this album are “Civilized Man”, a song about love gone bad, the ballad “Lights Of The City, which reminded me a bit of Shotgun Messiah‘s “Living Without You” in the vocals, “Sweet Venice” which incorporates a slight funk sound and a song that would make the BulletBoys proud in “Take The Money”.

The best of the bunch though are saved till the very end, ending things on a killer note. “Promised Land” is a full-on rock assault and “Alright” rolls along with a heavy-footed drum beat. And then it arrives, one of the best tunes I’ve heard in ages… “Frisk Me”! By the time the song gets to the chorus of “I ain’t got a search warrant, still gonna frisk you little mama” you’re completely enthralled. The song is the perfect mix of sleaze, harmony and talent, and I can’t even imagine how much damage it has done to my hearing by repeatedly playing it at full volume.

It should be rather obvious by now that Dumblondes has blown me away. It really showcases how incredible music of the late 80s was, when an unknown like Lessdress can outshine some of the commercial legends. Do yourself a favor and pick up this CD… your ears (like mine) may be upset with you, but that’s a small price to pay for pleasure.