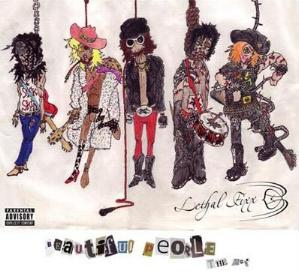 Review:
Take equal amounts of 80s sleaze and early 90s Sunset Strip glam, mix it up with current hard rock and you’ve got yourself a lethal mixture – or in this case a Lethal Fixx. This London band offers up some of the best and worst in glam rock music.

In a way Beautiful People reminds me of Kid Ego, not so much in sound but because something always seems to be happening. With each listen you will discover something new, and extra praise has to go to drummer Billy Harlett who lays down some impressive and original beats.

Lethal Fixx is at their best when they display a mean-streak like on “Mainline Traxx”. That song sounds like a hyper version of the Sea Hags and often Jade Leearr has that Ron Yocom sneer in his vocals. The guys also delve into that limp-wristed punk glam territory that I’ve never been able to get into, most notably on “Miss Lonely Hearts” (although the guitar solo kicks ass). However, even at their worst, Lethal Fixx offers something worth listening too – be it the guitar solos or memorable drum beats.

Fans of big haired punk-glam bands of the early 90s are going to foam at the mouth over Lethal Fixx and for sleaze fans such as myself the band offers up enough dirt to keep us happy. All-in-all Beautiful People is a good first attempt, now if they could only write more songs like “Mainline Traxx”.