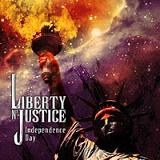 Review:
To be honest, the first couple of times I spun Liberty N’ Justice‘s Independence Day CD I could not get into it. That being said, now I can’t stop playing it! Must have been in the wrong place at the wrong time or a full moon or something, but I’ve been spinning this disc for about two weeks non-stop and am enjoying it more and more each time!

Yes, Independence Day is an acoustic driven record, but there are still enough electrified solos and big bottom ends to keep most people interested. The production is huge and the songwriting is top notch. The CD also has a “positive message”, which I think is great. And it is not overly preachy in the least, you probably wouldn’t even notice the band’s religious leanings unless someone told you or you visited their website. For myself, I don’t care what the message is or isn’t. I am all about quality music being played well.

Independence Day is a who’s who of vocal A-listers. Highlights for me are “Doubting Thomas” (featuring John Corabi), “Monkey Dance” (featuring Jack Russell of Great White, who has never sounded better), “Phoenix” (featuring Pete Loren of Trixter), “Praying For A Miracle” (featuring Ted Poley of Danger Danger) and “Fade” (featuring Jaime Rowe of Guardian) to name a few (and there is still a number of honorable mentions). “Wake The Dead” however, is not so good, but hey opinions are like taste buds, everyone has them. The band is nothing to sneeze at either featuring seasoned veterans like Jerry Dixon, Kevin Chalfant, Tommy Denander, Jack Frost and on and on… If Liberty N’ Justice can do this acoustically, I can’t wait to hear what they can do all amped up.

If CDs like Nelson‘s Because They Can, Mr. Reality‘s S/T and Days Of The New‘s S/T sit proudly on your CD shelf and you think they are the ‘cat’s meow’ then this outing by Liberty N’ Justice will be an excellent addition to your collection. If however you can’t wrap your brain around something with a little diversity and/or not turned up to 11, then you will be disappointed.